They set up shop in the parking lot of St. John’s United Church of Christ, 4500 S. Prescott Ave., to distribute 400 meals.

In the first 20 minutes, about 20 vehicles had driven through the parking lot to pick up the meals, Quintero said.

“It’s like a pantry, a food pantry,” said Quintero, who was bundled up and wearing a face mask because of the coronavirus pandemic.

“We hope to help people out,” Quintero added. 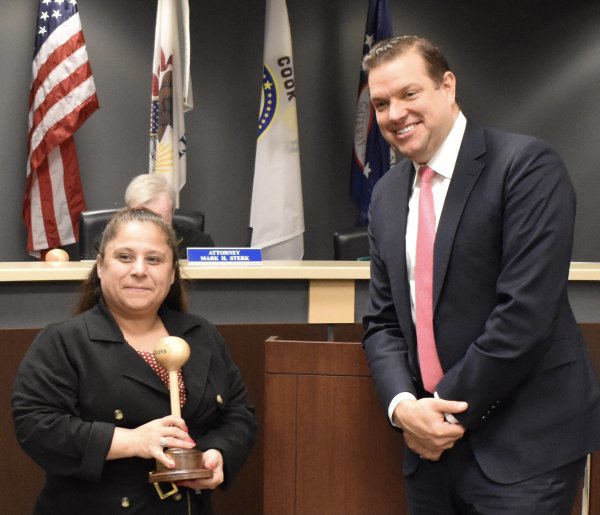 Gonzalez said he was approached by Meridian Health about the idea of offering meals to the needy.

“They have been doing some stuff around Illinois,” Gonzalez said. “They’ve done this this in Elgin, Waukegan, the Southwest Side of Chicago. They said they wanted to work with my office, and asked where we could do this.”

“The church offered the space,” Gonzalez said. “I didn’t know what the weather would be like, but this is what we are dealing with.”

Vasko was excited about the opportunity to host.

“When I was asked, I said, ‘yes, of course, we’d love to’,” Vasko said. “Actually, we’ve been looking for ways that we can reach out to do things for people in the community, especially during this time with social distancing and all the isolation.”

Food was distributed safely to each vehicle, handed through an open window with the minimum of time spent interacting because of the pandemic.

Motorists entered the parking lot from 45th Street, picked up their food, then exited onto Prescott Avenue, also known as Route 66.

“It’s an easy drive-through,” Vasko said. “We’ve even applied with the state to be a resource to help distribute vaccines for COVID-19.”

“We’d also be willing to host being a site for COVID-19 testing if ever needed,” Vasko said. “We love doing events like this.”

Any food not distributed was to be delivered Monday evening to seniors in town, Quintero said.

“It’s nice for our town,” Quintero said. “There are people in need. It’s good to give back to the community.”

“It was a nice event that Clerk Quintero put on,” Getty said. “I’m very happy she, Rep. Gonzalez and the Village of Lyons volunteers were able to help the residents of Lyons.”

Who are the Arabs of the Southwest Suburbs? Blogger