“They got out here, they got to play a real game,” Sloan said. “That’s what it’s supposed to be all about. Win, lose or draw, I was happy the kids got a chance to play.”

That chance resulted in a 69-61 victory over Morton in Cicero on Feb. 12. Lyons jumped to a 20-8 lead and held off several Morton rallies.

Because of the coronavirus pandemic, no fans were in attendance. There were no cheerleaders, no pep band.

Sloan had good reason for concern. 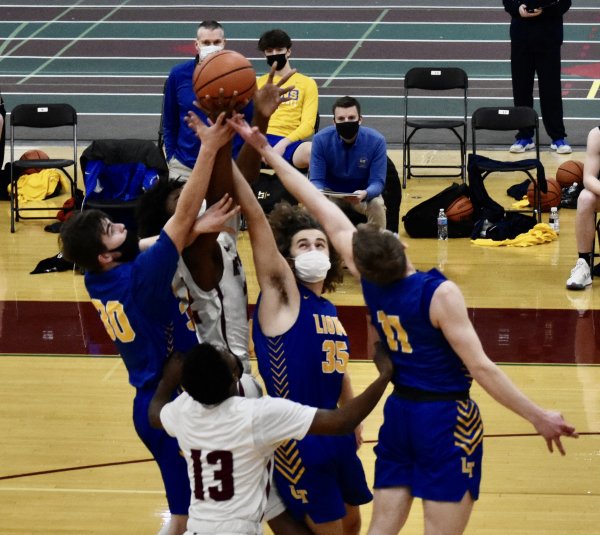 Lyons’ Christian Desimone (left) – who scored four three-pointers in the first quarter – Emmett Spolar and Tommy Asleson reach for a rebound along with Morton’s Armani Flowers (13) and Victor Garrett during the Feb. 12 season opener. Photo by Steve Metsch.

“We had a pretty good effort on defense,” Sloan said. “Perez and No. 11 (Gonzalez) can really score, so that was quite a challenge. We did a pretty good job on the defensive backboard. Not perfect, but we battled.”

Lyons drained six three-pointers – four by senior Christian Desimone – to lead 20-13 after the first quarter. The closest Morton got after that was 27-24 in the second quarter.

“(Morton) started off playing a zone, and with the guys hitting those threes early, it kind of changed the way (Morton) approached defense,” Sloan said.

Morton Coach Tony Martinucci agreed: “They shot us out of the zone.”

“Playing with (Perez) will make them better,” Martinucci said. “They’re good, but they’ve got to learn … We’ll get there.”

Lyons had three players in double figures. Desimone scored 16 points and senior Cade Nelson scored 14. Junior Tavari Johnson, made a splash in his varsity debut, scoring 15 of his 23 points in the second half.

“I’m very happy,” Johnson said. “I thought it was a great team effort.”

Playing without fans helped, he said: “(There are) no (opposing) fans yelling at you the whole game. You get to focus when you play with no fans.”

The required wearing of face masks because of the pandemic was a challenge.

“You get tired quicker,” Johnson said. “It’s harder to breathe, but the water breaks halfway through really help.”

Also helping was Lyons’ impressive free throw shooting. Lyons was 13 of 15 at the line, while Morton was 12 of 20.

Perez thought the game came down to missed free throws, but was encouraged by the Mustangs’ desire.

“The good thing is the younger players on our team didn’t give up,” Perez said. “They play hard. I know me and Elisio scored most of the points, but without defense we probably would’ve lost by a lot more.”

Johnson said accurate three-point shooting early opened up the floor and allowed him to drive the lane. Twice after Johnson missed layups, junior Elliot Russell (8 points) was there to grab the rebound and score.

“I was really proud of our effort,” Sloan said. “It was ugly at times, especially late against the pressure. We turned it over a little too much, but the kids shared the ball with one another and found open guys.”

Martinucci said that had he been able to scout Lyons – as he would have in any pandemic-free season – Morton would have pressed more often.

Lyons plays at Proviso East at 6 p.m. Wednesday, and is home against Leyden at 6 p.m. Friday.