After being forced to cancel its annual town meeting last year because of the coronavirus pandemic, the Township of Lyons is determined to hold a meeting this spring.

Township Clerk Mike Porfirio, at the board’s Feb. 9 meeting, said the plan is to hold the meeting on April 13 at SeatGeek Stadium, 7000 S. Harlem Ave., Bridgeview.

Exactly where that meeting will be held at the stadium remains to be determined.

But Porfirio and Township Supervisor Christopher Getty are confident the annual meeting can be held safely with proper social distancing during the pandemic.

In past years, the meeting it was held in a large room at the stadium with catered food. That, because of pandemic precautions, may not be possible this year. But the township has options.

“We are fortunate that address includes the stadium, inside the stadium and the parking lot,” Porfirio said. “We have some options of how we want to hold that meeting. If we have to do something outside, we can do it outside.”

He and Getty noted that the Lyons Township Democratic Party Caucus was held outdoors Dec. 1 in the stadium’s parking lot. It was chilly, but a success.

More than 150 Democrats sounded their vehicles’ horns to approve of candidates and vote on issues in perhaps the most unusual caucus ever held. Statements were broadcast on a screen used for drive-in movies there last year.

“We think the weather would be nicer (in April), so I think we’re being very realistic,” Porfirio said. 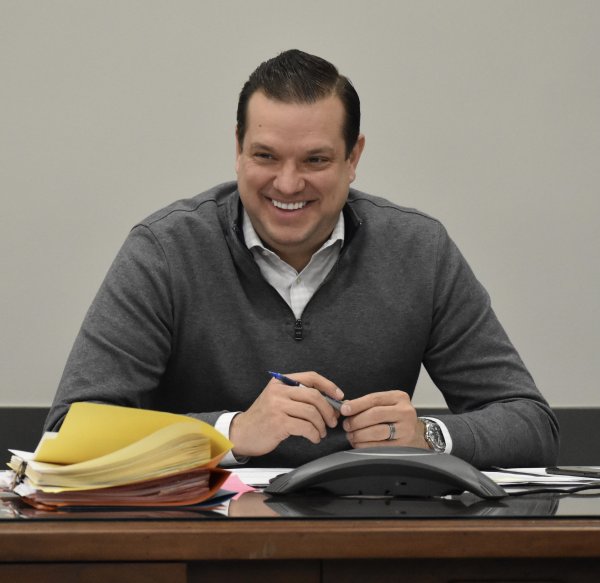 Township of Lyons Supervisor Christopher Getty is hoping the annual town meeting – canceled last year by the coronavirus pandemic – can be held on April 13 at SeatGeek Stadium in Bridgeview. Photo by Steve Metsch.

In other business, the board unanimously approved a $1,000 sponsorship to become a community partner with the La Grange Highlands Civic Association.

“They’re a good entity,” Getty said. “Any time there’s a homeowner issue or a concern, they always call us or contact us.”

LGHCA President Jodi Golm said funds will go to scholarships for graduating high school seniors, and for newsletters and mailings. The group has about 200 members, she said.

“We work with the local entities, we have a safety committee, a storm water committee for flooding issues, we have a lot of things going on,” Golm said.

In return, the township gets recognition on the association’s web site, Facebook and Nextdoor accounts, and in e-mail newsletters, Getty said.

The board also approved about $20,000 in improvements for the township building.

The board will pay $8,905 to KPD Services, of Orland Park, for painting interior walls and doors.

The board also pproved a proposal from Robert R. Andreas & Sons, Inc., in Cicero, for two doors at the back stairwell and one for the Senior Transportation Office. The $10,965 cost includes labor and materials.

“Recently, we had two exterior doors that were severely rusted (and) replaced by Robert R. Andreas & Sons,” Getty said. “They did an excellent job.”

Getty gave the board an update on roof, masonry and exterior renovations planned this year.

Bids are due at 10 a.m. on March 2 to the clerk’s office, with a letter or recommendation presented to the board at its next meeting set for 6 p.m. March 9.

Porfirio reminded the board that help is needed for the April 6 election: “For the trustees, if you know people interested in being an election judge, please spread the word.”

Trustee Colleen Kelly, who oversees senior services, said the way township bus drivers have been consistently checking on the well-being of  seniors “is really amazing.”