All in the family

The unofficial first family of Lyons Township High School boys basketball is having an unusual winter.

With the high school season in Illinois on hold because of the coronavirus pandemic, no games are being played in the Lyons Township fieldhouse.

Hence, for the first time in eight years, there is not a Niego playing varsity basketball for Lyons.

Nolan, 20, soon joined Connor and Noah on varsity for two years. Nolan then played one season, 2018-19, with Grant. Last season, Grant, 19, was the only Niego on varsity.

Jackson, 16, would be playing sophomore basketball if not for the pandemic. Given his pedigree, he is a safe bet to be on varsity the next two seasons.

So, when Jackson is a senior during the 2022-23 season, one or more Niego will have played varsity for Lyons in 10 of 11 seasons. 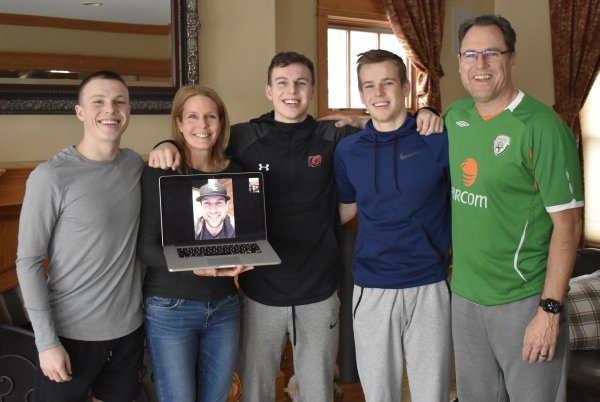 The Niego family of Western Springs has many ties to Lyons Township boys basketball. Sophomore Jackson (left) will soon follow the lead of brothers Harrison (on laptop) Nolan and Grant by playing varsity ball. Mom Julie and father Joe played in high school and college. Not pictured is brother Connor and cousin Noah, who both played varsity for LT. Photo by Steve Metsch.

It’s an amazing run, one that may never be matched in school history and one that seemed meant to happen.

Father Joe and mother Julie both played basketball in high school, he at DeLaSalle and she at Schaumburg. They both played at Lewis University.

The family tradition began there as Joe and his three brothers were in the starting five at Lewis, getting national media attention. Joe was drafted by the Houston Rockets in 1987, but didn’t make the cut.

While Joe and Julie may have been star athletes, but they didn’t intend on raising their own starting five.

“We didn’t want to be the screaming parents on the sideline, living their life through their kids,” Joe said. “We pulled away from sports all together. They we have one son, then another, then five boys. They’re the ones who dragged us in.”

Harrison started playing with a Little Tykes basketball game in the basement. His brothers followed. The fuse was lit.

“They gravitated toward basketball,” Joe said. “Then you have a hoop outside and, all of a sudden, they’re paying together and the rest is history.”

“That’s the one sport you can do together with smaller numbers,” Joe said.

Playing in college or making all-state was never the goal.

“It’s all secondary,” Joe said. “It’s having sports work for us, opposed to us work for sports.”

Harrison, who played at Indiana University for a year as a walk-on and then played at Hillsdale College in Michigan, said it would have been hard to not become a basketball player.

“When you have (four) brothers who are also passionate about it, it’s hard not to get into, especially how competitive we are,” Harrison said.

Nolan’s face lit up when he recalled winning a regional with teammate Grant.

“That was a special year,” Nolan said. “Not only did we have success as a team, but me and Grant got to play together. From fourth grade to eighth grade, we were on the same travel team. We knew each other’s games really well. I kind of knew what he was thinking before he did what he did.”

“We did back-door cuts,” Grant said. “I followed him on threes. There were times I knew he was ready (for a pass). There was a connection, for sure.”

That connection carries on. Grant and Nolan are both playing this season for DePauw University in Greencastle, Ind. Connor, who played three years for Holy Cross, is now with Lewis University. Noah played a year at Loras.

“A lot of people look up to NBA players, which is cool and all, but watching them play it’s like, ‘I can do that. I can mimic them,’ “ Jackson said.

Julie, who often played sports with the boys, enjoys watching them play. The color-coded chalkboard calendar in the kitchen of their Wester Springs home – empty this pandemic year – was often filled with their practice and game schedules.

Julie is a part-time school teacher and Joe works in real estate. Both are busy with Chicago LockDown, a youth basketball program they started that has about 300 players.

The boys played in the program. Jackson still does.

“We put in the sweat equity to be the best we can be,” Nolan said. “It’s more of the focused goal rather than do something for a certain status. What it comes down to is we want to win. … For us it’s always been about winning, about playing with brothers.”

“He has a well-polished game,” Harrison said. “He’s definitely on his way to achieving what he wants. If you want to get where you want to go, this is what it takes. A lot of kids need to hear that. … To play college basketball is a lot of work. I think it’s 1 percent of all high school players play in college.”

Not having a high school basketball season because of the pandemic has been tough, Jackson said.

“I’m just working out here,” Jackson said. “If we have a season, (I will) try to come back in the best shape possible.”

If he’s like his brothers, he won’t be nervous in a tie game with 0:03 on the clock.

He’ll follow Grant’s advice: “Act like you’ve done it before.” And will recall Nolan telling him to keep his cool.

“That comes from preparedness, from knowing you’ve gone as hard as you could in practice and you’ve given 110 percent to your game,” Nolan said. “So, when that crunch time comes, you’re ready. It’s hard to be flustered when you’ve played so much.”

“Basketball is a simple game at times. You’re down two and need three.

“We’ve played so many games in our lifetime,” Nolan added. “Five-on-five in a team, three-on-three out back, we’ve been through the ringer in situations, especially playing three or four games in a day in travel ball. There isn’t much we haven’t seen.”