Billed as a “Passport Through Countryside,” the City of Countryside again presenting its annual Summer Concert Series on Thursday nights through Aug. 2.

Each week has a different country for a theme. The series started on June 7 with Rosie & The Rivets as the headliner after the Steel Express Band opened.

Each night, an opening band plays at 6 p.m. with the headliner playing from 7 to 9 p.m. in Countryside Park, located on 61stStreet, just east of Brainard Avenue.. 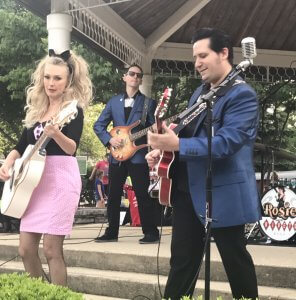 Rosie & The Rivets kicked off the summer concert series in Countryside on June 7. Photo by Steve Metsch.

Here is the lineup:

June 14: Ireland. The headliner tonight is the Whiskey Brothers Band, a traditional Irish band that plays Irish jigs and ballads, along with American music with an Irish flair. The opening band, 1976, covers hits from the ‘70s. Food vendor: Kenny’s Irish Pub.

June 21: Caribbean theme. Johnny Russler & The Beach Bum Band is the headliner. They cover songs by Jimmy Buffett, Jimmy Cliff, Bob Marley and others. Timeless, which dates back to the 1960s, will open. Food vendor: Pisa Pizza.

July 5: Sweden. ABBA Salute is the headliner, playing music by ABBA, the hit-making band from Sweden. The Scott Allen Band opens. Food vendor: To be determined.

July 26: Spain. Wild Daisy, which has three singers and plays country favorites, is the headliner. Opening is Guitarra Azul. Food vendor: Ledo’s Pizza. This night concludes with a fireworks display.

Aug. 2: Poland. Spoken Four, which has ties to the wildly popular Maggie Speaks, is the headliner. Dan Mateja and The IPA Band, will open with polka music. Food vendor: To be determined.