Preacher sets up box for those seeking help

More than 100 prayers have been delivered in the past 13 months to a Lyons couple.

Some are neatly written on stationery.

Some are scrawled on scraps of paper with handwriting that resembles what’s seen on a doctor’s prescription.

Some include names. Some are anonymous. 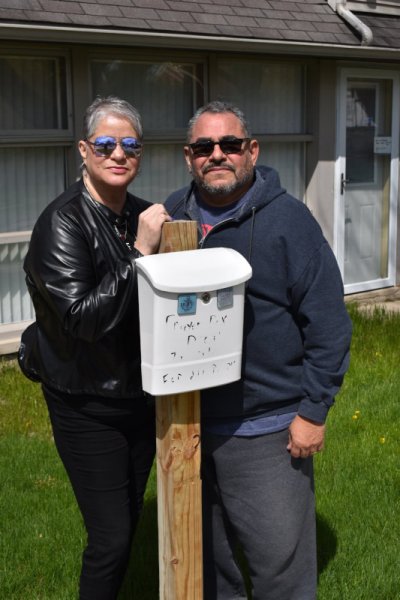 The Rev. Henry Vega and his wife, Lysette Vega, have received more than 100 prayers in the box outside their Lyons home since March 2020. Photo by Steve Metsch.

All are tucked into the white prayer box that stands outside a house at the corner of 41st Court and Center Avenue.

They are all read. And they are all prayed for by the husband-and-wife team of the Rev. Henry Vega and his wife, Lysette Vega, pastors of True Vine Southtside Church.

Their church had been in another location, but is now in their home “because of COVID-19,” Henry said.

The prayer box dates back to March of 2020, when the coronavirus pandemic began to tighten its grip on our world. More than a year later, the pandemic shows no signs of quitting. Nor do the prayers.

“The Lord had put it in my heart to put up a prayer box because of the times we were heading into,” Henry said.

“Even the mayor of Lyons put a note in,” Henry said.

On Dec. 11, Mayor Christopher Getty left a handwritten note on his mayoral stationery: “Thank you for providing the prayer box to the community. God bless!”

Henry keeps all the prayers in a small wooden box on a coffee table in their living room. The word “HOPE” is on the lid.

The prayers cover a wide range of topics. One asks for help dealing with anxiety. A teenage girl worries about being bullied.  One needs a job.

Lysette, 53, said one older man came to their door, asking them to pray for his son, who had become violent.

“He was crying,” she said. “He came to our door, asked us to pray for him and for his son. We prayed a few times.”’

Sifting through the slips of paper, Henry read one.

“Here’s one a person wrote. ‘Thank you, God. I’m still trying. I have hope. Some things have changed and other things are the same’,” he read.

“So, here’s a person that wrote, that asked for prayer and realized certain things have changed in their lives,” Henry said. “And they’re letting us know that our prayers are helping.” 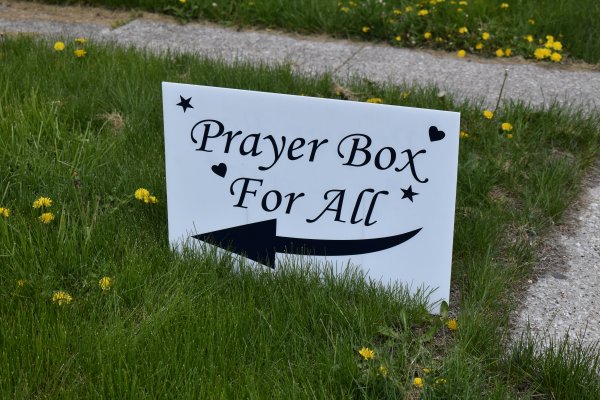 Passersby on Center Avenue, at 41st Court, see this sign that was donated by a man impressed with the prayer box. Photo by Steve Metsch.

Henry is accustomed to delivering messages and caring for others.

He is a truck driver for the U.S. Postal Service based in Bedford Park. He delivers mail from there to post offices in the area.

Before that, he served 16 years in the Army as a parachute rigger. He received an honorable discharge in 2003.

Henry, 64, received his calling from the Lord 20 years ago.

“I crossed over from the other life that I had, and ever since 2001, I’ve been serving the Lord,” he said. “I was disobedient. I wanted to do what I wanted to do and not follow God’s will.”

“I had a desire in my heart to change. My prayer to God was ‘Is this all you have for me? If it is, then take me. If not, then show me the way’,” Henry said. “The way was to go to church and be obedient to His word.”

Soon after, he met Lysette at the God’s Army Church at Kedzie and Huron in Chicago. They fell in love and got married. In 2010, Henry was ordained a minister in the New Life Covenant Church, based in Chicago.

Their prayer box, standing on the Center Street side of their home, offers people hope, Lysette said.

“Some people feel God is so far away. ‘You’re up there, I’m down here.’ God is still the same. His mercies are new every morning,” Lysette said.

She and Henry pray that they can again have a church outside their home. But for the time being, they are happy to hold services in their living room.

“We need to reach out. We have to do something. The worst thing you can do in life is nothing,” Lysette said. “I’d rather be part of something that counts.”

Henry agreed, noting the Bible reminds us we should love our neighbors.

“Well, who’s our neighbor? Everybody in this community is my neighbor. I get to know my neighbors. We get to know each other,” Henry said. “We’re not about denominational. We just believe in our Lord Jesus Christ.”