Svetich ate a cheeseburger. DiMundo enjoyed a bratwurst which he said was “delicious” at the First Responder Appreciation BBQ.

“It’s very nice that first responders are getting recognized, especially in this climate that we’re living in,” Svetich said after he and DiMundo ate lunch on a picnic bench outside the Mustangs clubhouse, 4047 Leland Ave.

“It’s hard these days for policemen, firemen. … Everybody does their part,” said Svetich, who has been with the McCook Police Department for 32 years.

A 26-year veteran, DiMundo added: “Anything they do for us that’s positive is really appreciated considering all the negativity that’s out there. There’s a lot out there.”

And there’s also a lot of appreciation.

“We get a lot of pulling up to a stoplight, someone leaning over, rolling their window down, thumbs up,” Svetich said. “It’s really nice because it does get depressing at times. There’s a lot more out there that support us than we realize.”

Mustangs Vice-President Ron Penn is among the appreciative. It was Penn’s idea for the Mustangs to provide a free lunch for first responders.

The Mustangs had 100 hot dogs, 100 hamburgers and 100 bratwursts to distribute with countless bags of chips and bottles of water. 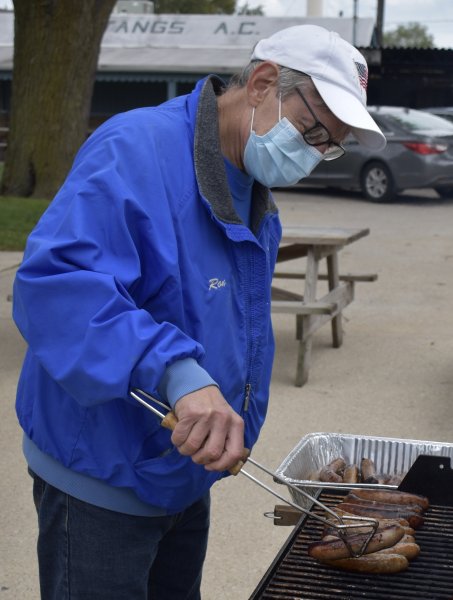 Ron Melka, executive director of the Lyons Township Mental Health Commission and a Mustang for 25 years, was busy grilling bratwursts.

The township board last month donated $750 toward the BBQ.

“We would normally be having our Octoberfest this weekend, the skilly,” Melka said of the Mustangs’ annual tradition.

“At least we are able to do this, even with the current pandemic,” Melka said. “We are certainly appreciative of our first responders and want to do all we can.”

Social distancing was practiced for those who wanted to dine on picnic benches outside the clubhouse. Or, they could take lunch to go. Some did both.

One of the oldest organizations in the village, the Lyons Mustangs Athletic Club was founded in 1924.

Lyons Mayor Christopher Getty, who attended the luncheon, said: “I think it’s great that this community organization, the Lyons Mustangs, are doing this to honor and thank the first responders.”

“(First responders from) most of the communities around of have come to pick up some food, as well as Lyons police and fire,” Getty said.