Did the Pekau administration on Thursday edit the audio files of Orland Park Mayor Keith Pekau bullying Trustee Dan Calandriello in order to prevent taxpayers from hearing his vicious and personal attacks against another elected official? Pekau was angry because I published an opinion column that quoted his remarks at length and he responded by asserting that my column was “highly fictional.” Was removing the audio files intended to justify his false claims?

UPDATE: This column was updated and includes information and  response from the Village of Orland Park.

UPDATE: After I published this column, and sent a FOIA to the Village Clerk, the Clerk’s office sent me the correct and full audio files. The online files on the Village Website, which were corrupted, are now restored! I wasn’t the only person having trouble accessing the file and it was brought to my attention by a local business owner.

The Village argues that the problem is with me, that I had technical issues. I guess I should just take their word on that!!!

This is NOT the first time this type of incident has happened. It happened in August 2019 when the file involving Hope Covenant Church announcing plans to have homeless shelter that Pekau ignored. That file was deleted but later restored too when the Village was challenged

In a move reminiscent of the Watergate fiasco that brought down the administration of disgraced former President Richard M. Nixon, a public audio file (as of Thursday April 9, 2020) of a meeting in which Orland Park Mayor Keith Pekau viciously attacked a fellow elected official, Trustee Dan Calandriello, appeared to have been edited to delete the majority of the taped discussion.

The public audio file about 18 and 1/2 minutes from the Monday April 6, 2020 “Meeting of the Whole” appeared to be edited with the majority of the file deleted from the Village of Orland Park’s website. In its place was  a recycling edited audio file that played the first 50 or so seconds of the meeting in a repeated recurring loop. The same occured for the audio file of the Village Board meeting which began afterwards at 7 pm.

Instead of hearing Pekau’s ugly, personal attacks against Calandriello, listeners now hear a file that starts and repeats only with the first few seconds of each audio file. 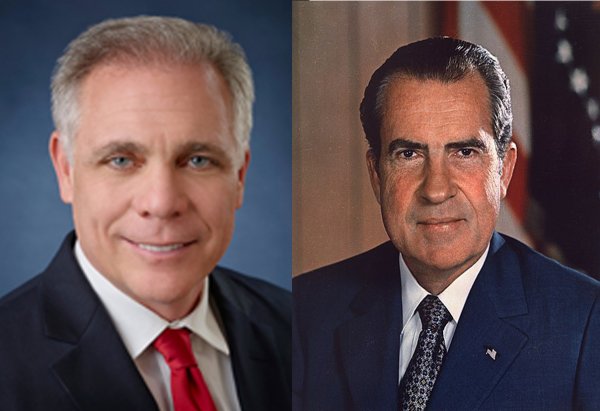 Orland Park Mayor Keith “Watergate” Pekau and President Richard M. Nixon. Both were embroiled in a scandal involving the deletion and editing of 18 1/2 minutes of tape they didn’t want anyone to hear. Pekau image courtesy of the Village of Orland Park. Nixon photo courtesy of Wikipedia.

Why? Is it because in responding my column, in which I quoted his ugly remarks at length, Pekau asserted in his political newsletter on Wednesday that the column I wrote was “highly fictional?”

I don’t know what the answer is as village officials insisted Thursday that the file was not tampered with and suggested that it was some other cause.

Anyone who listened to the full audio tape could hear that in fact my column perfectly transcribed every word of Pekau’s vicious attack and none of the quotes were “fictional” at all and were accurate.

If the the nearly 18 1/2 minutes of audio tape was edited or replaced or deleted, the Pekau administration would be denying listeners the ability to compare the two to see who is lying, me or the “Bully in Chief” Mayor Pekau. It helps Pekau’s fake argument.

I sent an email Thursday to Clerk Mehalek demanding a copy of the audio file and an explanation. (His office responded and said the file is working properly now.)

With the audio file mysteriously corrupted, both for the Committee of the Whole and for the Village Board meeting, the public can’t hear Pekau’s ugly rhetoric against Calandriello. And Pekau can continue his false assertions that my column transcription is “highly fictional.”

I don’t trust the Pekau Administration. If they did edit or delete the file then it would be typical of what failed politicians do. For example, President Richard M. Nixon deleted 18 and 1/2 minutes of audio tape from the secret White House audio tape files of his conversations which implicated him in embarrassing acts against his critics. The Watergate scandal brought down Nixon’s administration.

Pekau is no different than any political bully. They love to pretend that they are the victims and they will do anything, include making false claims that criticism of his actions are “highly fictional,” in order to distract taxpayers and voters from their failed leadership.

In addition to attacking the bullet-proof accuracy my column, Pekau also attempted to have me fired from employment, bullying governments that I work with.

I have criticized many politicians and government officials over the years who have acted with respect and commitment to the best interests of the public and taxpayers. Even though I often agreed and disagreed, expressing my criticism, they understand that unhindered Free Speech and criticism is essential to our American Democracy.

They include former Mayor Dan McLaughlin, who clearly was the best mayor Orland Park ever had, save for one misstep. And, former Cook County Commissioner Liz Gorman, who I disagreed with often but now respect as one of the best officials in Cook County. I have also criticized Orland Township Supervisor Paul O’Grady, Orland Hills Mayor Kyle Hastings, both great public officials who have reacted with professionalism and respect to the voters and taxpayers. And, I even criticized Trustee Dan Calandriello in the past.

Yet all of them far outshine Pekau when it comes to leadership and caring for the best interests of the public and taxpayers, rather than for themselves.

While we disagreed on issues they were NEVER as disagreeable as is Pekau. We engaged in a debate for the good of the taxpayers. They are professional politicians who recognize that elected officials are sometimes subject to criticism from the public.

The only thing “highly fictional” in this tale is the assertion by Pekau that he is a good public official.

Pekau has gone off the political deep end, much like Nixon, and he has thrown Orland Park into a comparison to Watergate.

I have lived in Orland Park and paid my taxes here for more than 35 years. I have worked as a journalist and now write Op-Ed opinion analysis and commentary for several media including The Regional Newspaper and SuburbanChicagoland.com.

Here is the truth that Pekau doesn’t want you to hear because his conduct is embarrassing to the taxpayers of Orland Park.

I recorded the meeting and the audio of that meeting is here for you to hear.

CLICK HERE FOR MY ORIGINAL COLUMN from Monday April 6, 2020.

CLICK HERE FOR THE ORIGINAL LINK  I posted to the Village of Orland Park of the audio file may have been edited to a short incomplete version — that village officials strongly deny. It was later mysteriously restored after I queried the Village.

CLICK HERE FOR THE AUDIO FILE that I taped of the meeting that the Pekau administration CAN’T Delete. There, you can hear Pekau viciously attack Trustee Calandriello.