The Bridgeview Police Department will soon get a 2021 Ford utility vehicle.

Trustee Norma Pinion said “we’ll take the guts, the lights, the computer, from a vehicle that’s no longer going to be used, so we’ll save money on that.”

Greenfield is located near Springfield.

In a Jan. 28 e-mail to Mayor Steve Landek, Fire Chief Michael Daly suggested driving down to pick up the car, which would save the village a $300 delivery fee. Daly volunteered to drive the new police car back to Bridgeview. 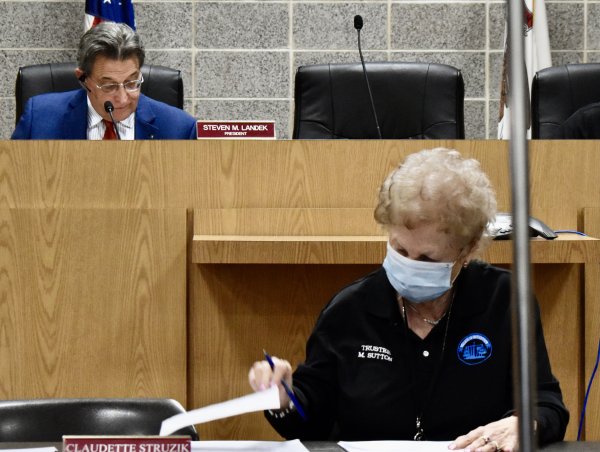 Bridgeview Mayor Steve Landek and Trustee Mary Sutton shared a light moment after she touted the snow-free streets of the village. Photo by Steve Metsch.

In other business, the board approved a two-year agreement with Illinois Department of Transportation that indemnifies that agency for work performed on state roads in the village.

The agreement is not unusual and is entered with IDOT by many communities.

Trustee James Cecott, who chairs the public works committee, said 79thStreet and Harlem Avenue are the only state roadways in Bridgeview.

“If there’s any work to be performed, the state’s not going to hold us to get insurance to do the work. That’s what that’s all about,” Cecott said.

The board also approved amending the number of liquor licenses and fees in the village, along with hours of operation.

If an establishment wants extended hours for gaming, it must pay an extra 30 percent for its license, Trustee Michael Pticek said.

The board also approved a resolution designating three weekends in September as Bridgeview Treasure Days, the annual village-wide garage sale.

Near the end of the meeting, Trustee Norma Pinion praised the village crews for their response to the snowstorm of Jan. 30 and 31.

“A lot of us read Facebook, and I see nothing but how wonderful our road department was with the snow,” Pinion said. “They were commenting on it was the best city around here (in terms of) snow removal.”

Trustee Mary Sutton added: “Bridgeview has never had a bad snow day as far as our streets go, and I’ve lived here since 1957. We have never had snow on our streets. Never.”