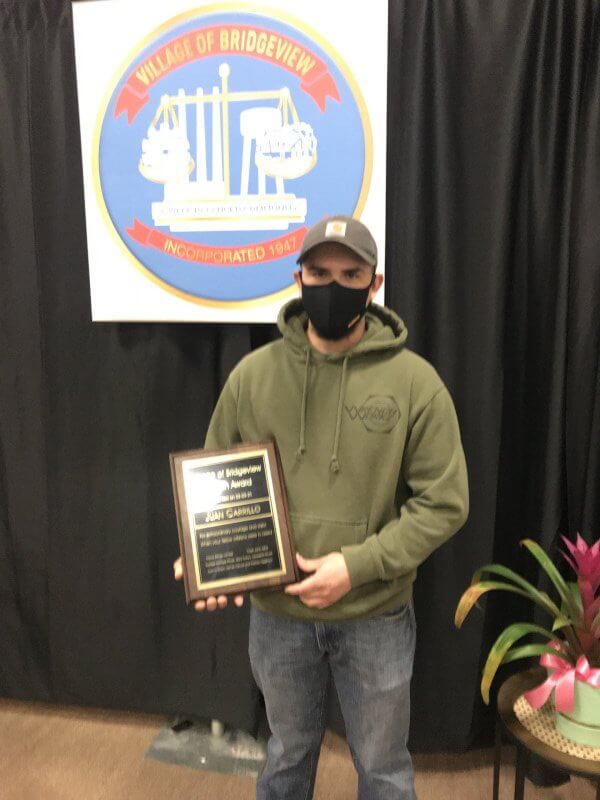 Man runs into burning house to save neighbor

Bridgeview resident Juan Carrillo never gave a second thought before he ran into a burning house to save a neighbor’s life.

Carrillo was getting ready for work at 5 a.m. Dec. 17 when he noticed flickering lights on the screen showing the view from his outdoor security camera.

Opening his door and looking outside, he saw the house next door was ablaze.

Carrillo, who lives in the 7800 block of 82nd Place, ran to the house and found his neighbor, a woman in her 80s, in a doorway.

Carrillo, 30, picked her up and carried her to the front steps of his home, where they waited for firefighter/paramedics who soon arrived and took her to a hospital.

Carrillo was honored for his heroics with a resolution and a plaque at the Feb. 3 meeting of the Bridgeview Village Board. 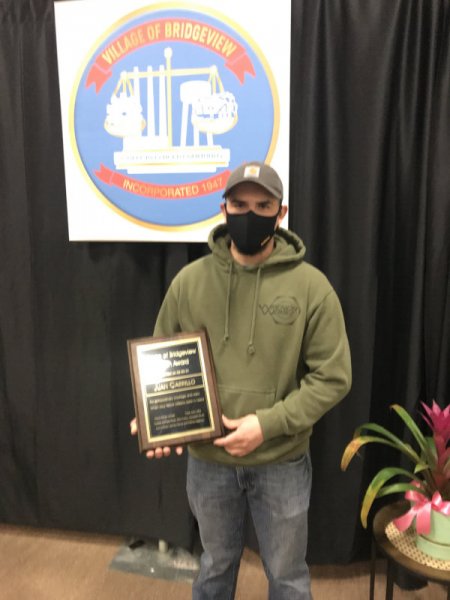 Juan Carrillo, 30, was honored by the Bridgeview Village Board for his decision to run into a burning building in order to save a senior citizen during a fire. Photo by Steve Metsch.

The woman, who suffered second- and third-degree burns over 33 percent of her body, is slowly on the mend at the burn unit of Loyola Medical Center, firefighter/paramedic and EMS coordinator Matt Duzak said.

Carrillo said he “ran out without even a sweater” into the cold early morning.

“I screamed at (girlfriend Jackie Kiwior) ‘Call 911, the house is on fire’,” Carrillo said. “I went to (the neighbor’s) house because she can’t walk that well. Luckily, she was at the door.”

Carillo was getting ready for his job at a maintenance man at the Riverside Country Club at the time.

“The fire was really bad at that point,” Carrillo said.

Asked if he was scared, Carrillo said, “I wasn’t thinking about that. I was just thinking about her. That was my focus. We get along good. I do her grass. I try to help out. Do my part.”

“I was just glad I was there to help her,” Carrillo said.

Fire Let. John Jennings said they woman may not have survived if not for Carrillo’s actions.

“She may have succumbed for the gases and the smoke,” Jennings said. The cause of the fire has been ruled accidental, Jennings said.

Kiwior was not surprised by her boyfriend of 15 years.

“He’s always been like that,” Kiwior said. “Always thinks of everyone else. Always wants to help everyone. Doesn’t want to be recognized for it. He’s just a great guy.”

During the board meeting, Mayor Steve Landek said “we congratulate people for a job well done, but this is something that goes way beyond what normally occurs.”

“He ran into the building and he saved a woman,” Landek said. “That’s a heroic, heroic act.”

Landek read the resolution commemorating Carrillo’s action, and presented him with the plaque.

Landek noted the “act of selfless bravery taken without thought for personal safety, but as an action taken to save another person’s life.”

“I have to say, when faced with those circumstances, would we act in the same way?” Landek said. “When I heard what he had done, it was stupendous.”

Trustee James Cecott said Carrillo “deserves a standing ovation,” when was then given by the board and audience members.

“I’m proud of the young man,” Trustee Patt Higginson said. “We need more people like you, especially nowadays. We’re so glad you live in Bridgeview. Thank you for your bravery.”

Latest posts by Steve Metsch (see all)
SHARE THIS STORY