He and his schoolmates have not been able to attended classes there for more than a year because of the coronavirus pandemic.

None of the schools in the district have been open – except for mandatory testing – the entire school year.

Mercado and just over a third of the students in Lyons School District 103 returned to the district’s school buildings on Tuesday.

After more than a year away, students file into Washington Middle School. Daniel Mercado (right) holds a door open for his fellow students. Photo by Steve Metsch.

Lower numbers for positive COVID-19 tests in the district allowed the schools to reopen. Doors at Washington opened at 12:30 p.m. Tuesday. Times varied at schools.

Students are in school two hours a day, twice a week, until the school year ends on May 24.

Students were given the option of returning to school over the semester’s final three weeks, or to continue schooling on-line in their homes.

Being back with his classmates in school, “feels a little bit back to normal,” Mercado, 13, said.

And, it certainly beats attending classes on-line at home, he said.

“That kind of sucked because it wasn’t the same, it wasn’t like normal school,” Mercado said. “Honestly, when we were going to school, I was having more fun.” 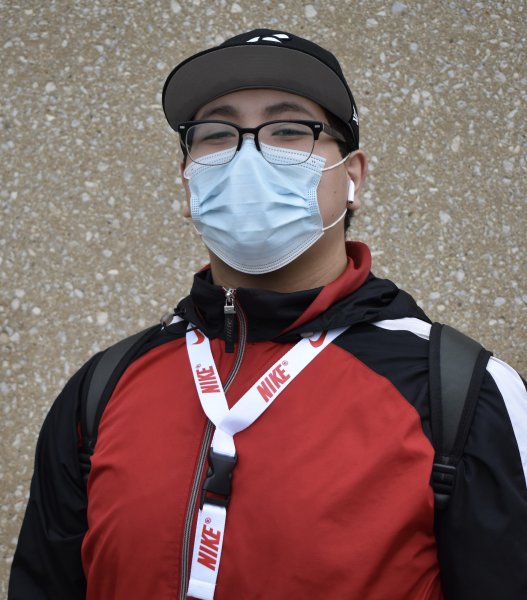 Seventh-grader Daniel Mercado said “it’s weird” to be be back in Washington Middle School, but he’s happy. Photo by Steve Metsch.

Another seventh-grader, Valeri Alvarez, 12, said schooling on-line “was difficult” because there sometimes can be distractions at home.

But, like Mercado, Alvarez also was happy to be back in Washington Middle School, even if it’s for three weeks.

Their enthusiasm made Supt. Kristopher Rivera smile. Rivera was outside the building, 8101 Ogden Avenue, greeting students as they arrived. 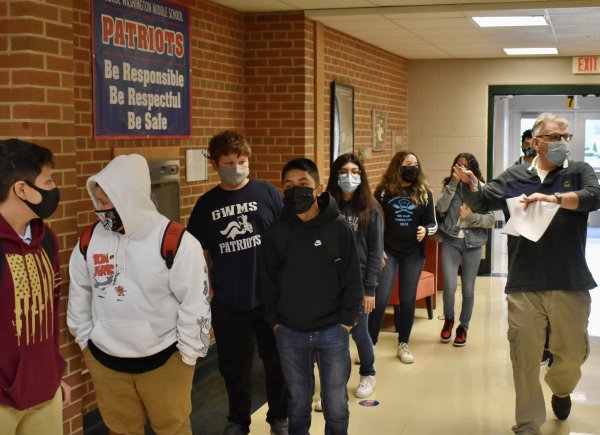 Social distancing is practiced in the hallways on the first day back. Photo by Steve Metsch.

That enthusiasm carried over to faculty and staff, he said, although “there is a little bit of apprehension this being our first go-around with more students in person”

The district last month welcomed back students for some mandatory tests, but the numbers were smaller, he said.

“There’s a lot of positive energy to see the kids, see how much they’ve grown,” Rivera said. “There are a lot of good relationships (between teachers and students).”

“The teachers and staff do this for the kids and everyone is anxious to see them,” Rivera added. 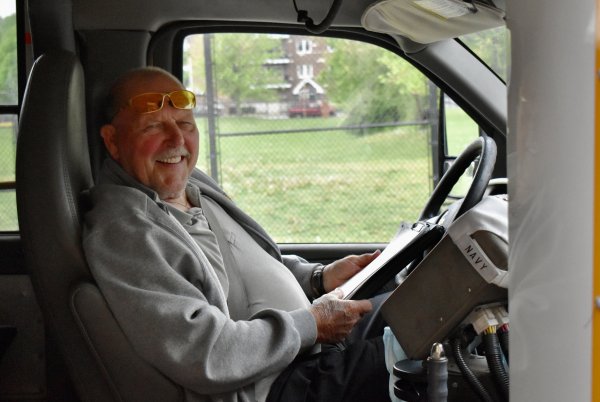 Bus driver Thaddeus Cizma said he saw many smiling faces on the first day back in school. Photo by Steve Metsch.

Another person glad to be back at Washington Middle School was Thaddeus Cizma, a bus driver for Grand Prairie Transit.

“I’ve been back since August on other runs, mainly in La Grange Park,” he said. “I’m just filling in on this one.”

Cizma said the response was very positive from parents and students on the first day of schools being open in District 103.

“Everybody is happy to be back everywhere I’m going,” Cizma said. “The kids have always been happy.”

Mercado said he was happy for a chance to be “goofing off” with his friends. And, he hopes to get better grades.

“I did not learn anything (on-line),” Mercado said with a laugh. “So, I really have to go back.”