Blues hit it big in Lyons

The first-ever Windy City Blues Fest in Lyons was deemed a success by organizers, performers and fans.

Getty said 2,000 people attended Saturday and another 1,000 on Sunday.

“I’m very, very happy that we had a successful event with great weather. And, everyone had a good time,” Getty said. 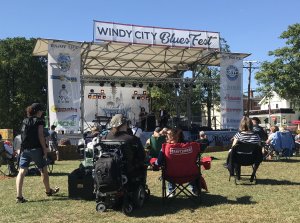 Perfect weather on Sunday was enjoyed by visitors to the Windy City Blues Fest in Lyons. Photo by Steve Metsch.

While he did not guarantee another blues fest in 2019, Getty is leaning that way.

“We’re inclined to think about it and start planning for another one because we had no incidents, all the bands were great, there was a good, positive energy in the air and everybody was happy to be there,” Getty said.

Getty said he and the Windy City Blues Society, which lined up the entertainment and helped run the festival, “didn’t know what to expect in the first year.”

“We set up the park where it could really hold a very large crowd. The attendance exceeded our original expectations, so we’re happy with that. We set it up to have plenty of room in the event we got 5,000 or 10,000 people,” Getty said.

Many raved about the setting.

Cermak Park is noted for its many trees, and the large, open grassy areas which allowed fans to sit on blankets, bag chairs or the many folding chairs supplied by the village as they enjoyed the music.

At the heart of the event were a dozen or so food vendors offering pizza, beef sandwiches, hot dogs, BBQ ribs and chicken, funnel cake and other treats. The beer tent was a popular place.

And there were plenty of novelty vendors representing various blues foundations, including the Windy City Blues Society which sold cups, T-shirts, hoodies, and memorabilia from musicians.

David “Mad Dog” Madlener, president and founder of the Windy City Blues Society, said Sunday he had heard from many pleased performers and fans.

“The number one priority was the musicians and then the fans, and all the workers who worked hard. The village and public works busted their butts all weekend,” Madlener said.

“It looks like we’ve got a good foundation. The first year is the hardest. When I was backstage, the musicians said these were the nicest amenities they ever had at a blues fest,” Hammer said Sunday.

That’s no surprise to Getty.

“We try to run a class act. We try to showcase the village in a positive manner,” said Getty who also heard from artists pleased they “had a place to stretch out and relax” before and after performing.

“There was nothing negative this weekend,” the mayor added. “The acts were fantastic. The weather was phenomenal. We had a lot of volunteers and everybody worked as a team.” 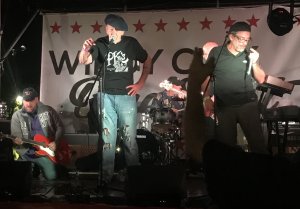 Tawl Paul, a blues legend in Carbondale, performed Saturday night with the Dead or Alives. Photo by Steve Metsch.

Ken Villari, of Stickney, is among the many eager for an encore.

Perched on a folding chair Sunday afternoon near the Main Stage, Villari soaked up the sun and the blues of Ivy Ford.

“Some of the bands were not the blues I knew growing up in Chicago, but the bands were good, even on the secondary stage. I saw Tawl Paul. He’s a little revved up for me,” Villari said with a laugh.

“I can tell you this, if the music is moving me, that’s what I like. I know when it’s my kind of music when my insides move,” Villari, 75, added.

Ray Hanania contributed to this story.