On a whirlwind tour of the suburbs, arranged by the Lyons Township Democratic Party, State Senator Kwame Raoul brought his campaign for Illinois Attorney General to a small church.

There, at the La Grange Second Baptist Church, 26 Washington Ave., Raoul told about 50 voters on June 16 why they should cast their votes for him in November.

He cited his experience in Springfield as a state senator, and promised an increased focus on environmental issues, and vowed to be his own man in office.

He fondly recalled advice from Barack Obama, whom he replaced in the Illinois Senate. Obama told him to spend time with people you don’t know and “with people on the other side of the aisle.” in order to get different opinions.

“What you see is what you get. This is a guy who works hard. When we need on tough legislation Springfield, we call one person. And that one person is State Senator Kwame Raoul,” Landek said introducing the candidate. 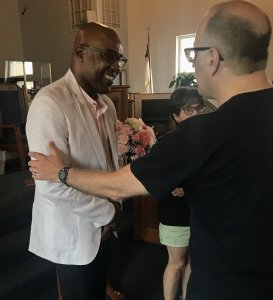 Illinois State Sen. Kwame Raoul, the Democratic candidate for attorney general, meets with Jim Longino during a campaign stop at a church in La Grange. Photo by Steve Metsch.

Raoul, who endured 31 debates when seeking the Democratic nomination “for this critical office” noted that “Gov. Bruce Rauner has personally selected Erika Harold to be the Republican nominee. That’s not the way our democracy is designed to work.”

After listening to his speech – along with his fielding three questions – several people said they were impressed and that he could count on their vote Nov. 6.

“This has been a great day. There have been different questions. It’s great for me,” Raoul said later.

He enjoys visiting with voters and with those who now are too young to vote. Jordyn Hoffenberg, 10, said “if I was able to, I’d vote for him.”

Jordyn had asked Raoul what he could do to prevent immigrant parents from being separated from their children, as is happening under President Trump.

Raoul said he’s met other attorney generals working together “more than they have before because of the policies that are coming from the federal administration.”

“We, as a General Assembly, has embraced policy that says no state resources can be used to enforce the job of the feds in term of immigration policy,” he said.

The son of Haitian immigrants, Raoul said he was “personally offended” by comments President Trump made about his parents’ homeland.

Jordyn’s mother, Elyse Hoffenberg, who serves on the School District 105 board of education, said Raoul “represents my morals, and he has a great background. I’m excited.”

Jim Longino, of La Grange, was impressed when Raoul said he would take a harder stance against companies guilty of polluting the environment.

“When he said, and it’s true, that they look at fines as a price of doing business. They need to understand environmental laws are in place to protect all of us,” Longino said.

Church pastor Micheal Henderson was pleased with what Raoul said about fighting crime: “It’s more than a racial issue. It’s just an issue, period. I was very impressed with the young lady who asked about immigration.”

Raoul said more focus should be placed on what causes gun violence. “There is a cycle we need to break,” the former prosecutor said.

“Sometimes,” Henderson said, “change is good. I believe he’ll be a breath of fresh air for our community and the whole of Illinois.”

The candidate had a busy day.

Landek hosted him on a tour of Lyons Township with stops at the Arab & Muslim Democratic Club in Bridgeview, and then with the Brookfield Democrats with Indivisible Brookfield at Mollie’s Public House in Riverside.

Other stops included Berwyn for a breakfast with mayors from nearly 20 surrounding suburbs; the Shiloh Baptist Church in Summit; Flagg Creek Golf Course in Countryside; and a cocktail reception in Western Springs. He also visited a few businesses in La Grange.