The sounds of silence

One of the biggest casualties of the coronavirus pandemic and sheltering at home has been entertainment.

We can’t go to the movies. The White Sox, Cubs, Fire and youth sports are idle.

And we can’t hear live music because large crowds are frowned upon as they could increase transmission of the virus.

With that in mind, we talked with three local musicians who after spending years entertaining us now are silenced.

The local king of polka music, Eddie Korosa, Jr., is not accustomed to being idle. He first performed in 1965, playing drums at age 7 for his father’s polka band.

“This is the first three months of my life (since then) that I haven’t performed,” he said.

Korosa has red X’s on a calendar for canceled gigs: 19 in March, 17 in April and 21 in May. His last show with his band, The Boys and Girl from Illinois, was on March 14 at a German restaurant in Glendale Heights.

“Isn’t that crazy?” Korosa, 62, said. “We were supposed to play in Nashville in March.”

Korosa thinks July will mark the return of live music in some form. 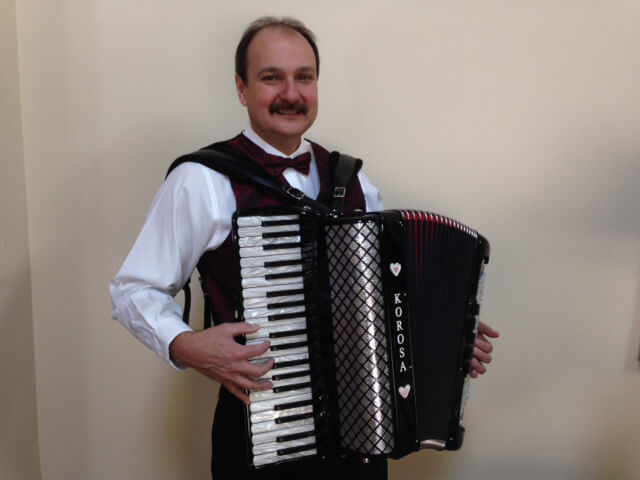 Eddie Korosa, Jr., is hoping live music returns in July when he has a show booked in Stickney. Supplied photo.

Financially, he’s doing okay, but he feels for other musicians.

“I had a real job back in the day, 39 years working for Cook County,” he added with a laugh. Now, it’s all music after his 2016 retirement.

Fans can get their polka fix on his web site or on YouTube.

“Every once in a while, I’ll post a song,” Korosa said. “Have you heard ‘My Pajamas Polka’? … I recorded it in my pajamas playing my accordion.” It was featured on CBS Chicago, he said.

You can watch and hear the song if you visit www.eddiekorosajr.com. He’s in his pajamas, and wears Homer Simpson slippers as he sings “hope you’re doing fine, so pour yourself some wine, stay safe and I’ll talk to you later.”

Fans have told him they “want a pajamas polka party when this is over.” He has a date to perform outdoors on July 15 in Stickney and said, “That may be my pajamas party.”

In April, he was asked by Tom Latourette to recorded backing music for his parody song “The Pandemic Polka.”

You can find it on YouTube, with Korosa wearing a face mask while he plays “The Pennsylvania Polka” on his accordion.

That’s the song often heard in the movie “Groundhog Day” in which Bill Murray lives the same day over and over and over. You know, kind of like are now.

Asked if the lockdown may result in his recording a new album, Korosa said, “you know, that might be a good idea.”

Korosa’s offers this advice to musicians and fans: “No one ever thought this would happen … We just have to ride the storm out.”

James Paul Lynch has spent the past eight years playing the role of George Harrison in American English, the popular Beatles tribute band.

American English plays 120 to 140 shows a year, with most from May through September.

And, now, Lynch, the primary bread winner in his family, has the summer off until further notice.

“We’re making the best of it, trying to do the best we can to stay fresh,” Lynch said. “it’s been nice being with my family … On a professional level, not well … We’re wondering how we’re going to pay our bills.”

Summer festivals, he noted, “are what a lot of people do for enjoyment.” And now they’re being canceled left and right.

“Certainly, The Beatles music is popular,” Lynch said. “What we do is very specific. People are used to seeing us a few times each summer. When they can’t, everybody suffers.”

American English has not performed music at home – as many performers have – to post on social media.

“We’re all quarantined, we’re not rehearsing,” Lynch said. “What do we do? Our own thing?”

“We’re waiting until we can do a really good, professional livestream on a stage with lights and good sound so people see what they’re used to,” Lynch said. “Nobody wants to see me in my socks doing ‘Here Comes the Sun’.” 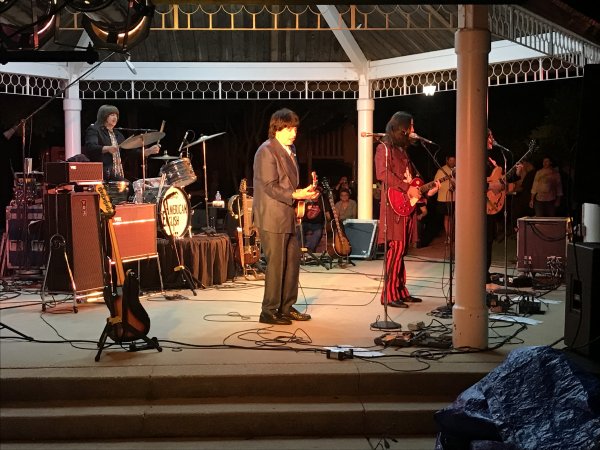 James Paul Lynch plays George Harrison (right) in American English. He and countless other musicians are concerned that the pandemic may keep them sidelined until 2021. Photo by Steve Metsch

Lynch wonders how concerts will be possible with the CDC recommending we stay six feet apart for social distancing.

“I think it will eventually return to some type of normalcy, but it will take a while,” Lynch said. “I don’t think until next year we’ll see the beginnings of that. Let’s pray for that.”

The band lined up a gig performing at the Belfry Music Theatre in Delevan, Wis., this weekend. At least one will be live streamed. Visit www.belfrymusictheatre.com for more information.

If you’ve seen Maggie Speaks, you’ve seen lead singer Dave Calzaretta. But it doesn’t look like we’ll be seeing him, Maggie Speaks or any of the other five bands he represents for possibly a year, he said.

“My family and I are healthy,” he said, “but from a business standpoint it’s completely devastating to the live performance and event industry.”

“We’ve seen our income go down to zero because all of our revenue is based on live performance and we’re simply not allowed to do that,” Calzaretta said.

Calzaretta fears the live music industry “will be one of the last ones to be set up once everything thing opens up.”

“All the festivals are going to be wiped out this summer. You’re looking at 2021 in May. Almost all the weddings are getting rescheduled for the spring of 2021,” Calzaretta said. “On the corporate side, I don’t see it opening up until July of 2021.”

Maggie Speaks has played in 13 countries and 33 states for corporate and private events.

“As a company, we went from playing 400 to 500 shows a year to nothing since March 7. We’ll do nothing of any significance this year is my prediction.” 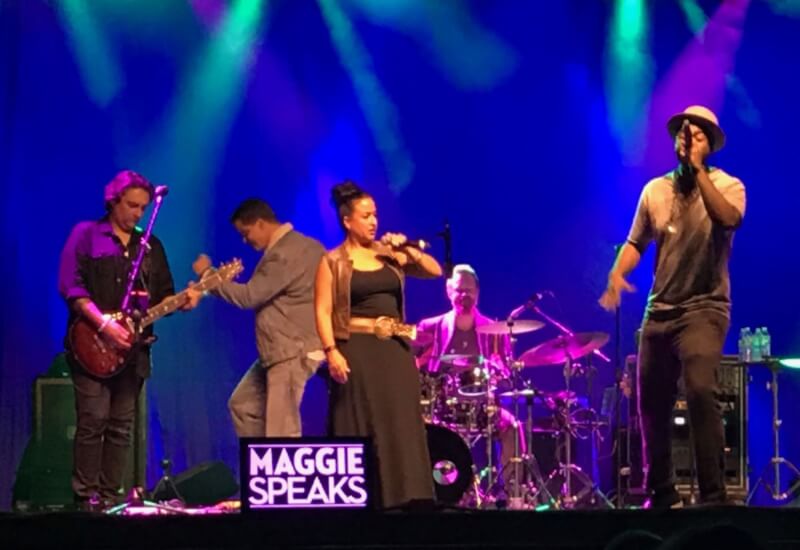 There are six bands in the Maggie Speaks universe. Calzaretta books shows for Maggie Speaks, Spoken Four, Final Say, Shout Out, Enough Said and Talk of the Town.

“I have 30 to 50 musicians who work for me. In the good times, some of these people live check to check, so it’s devastating to them …. Something like this is really hard. A lot of the government relief … Our industry tends to fall through the cracks because it’s a lot of independent contractors.

“We bring joy to people … that’s what our job is, to bring happiness and joy to people. And at a time when they need it most, we’re silenced for the most part,” Calzaretta said.

Maggie Speaks has posted a cover of Bill Withers’ “Lovely Day” during the sheltering at home. Here is a link: https://www.facebook.com/maggie.speaks/videos/537042496983845/

“There are some creative things we’re trying to do in that regard, but it’s hard,” Calzaretta added.

“We will emerge from this,” he added, “but there will be things that happen during this time that will effect life and business moving forward.”

In the meantime, Calzaretta has recorded a special COVID-19 cover of “We Are The World” in which he sings all the lyrics by various artists. You can find it at
https://www.facebook.com/davecalzaretta/videos/10221359505833227/

“My family thought I was insane,” he wrote on the Facebook post, adding, “Don’t take yourself too seriously during Shelter-In-Place and don’t forget to laugh.”

Tinley Park homes go all out with Christmas lighting Blogger