All Hands on Deck

It was “All Hands on Deck” for some residents of a Willow Springs subdivision on a recent Thursday evening.

The event was the brainchild of Carey Cochrane, who wanted to bring some fun to his neighbors while they were sheltering at home due to the coronavirus pandemic.

“I just thought of doing it because of the virus, something for people with cabin fever,” Cochrane said on May 21.

“Get out on our decks and say ‘hi’ to our neighbors in a safe way,” he said. 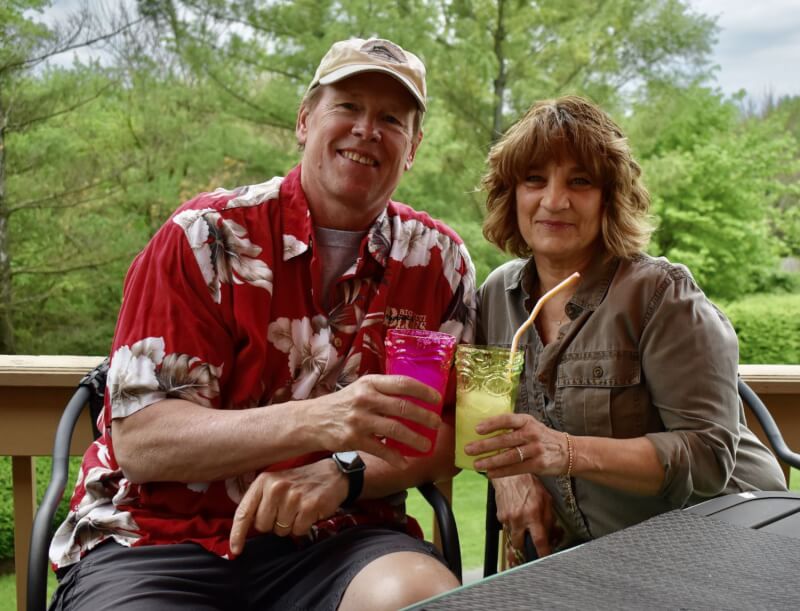 Carey and Mary Cochrane enjoy margaritas during the “All Hands On Deck” party he organized in their Willow Springs subdivision. Photo by Steve Metsch.

Cochrane lives with Mary, his wife of 34 years, and daughter Kelly in a unit at The Windings of Willow Ridge, located between 91st Street and the Des Plaines River.

He put his idea into the association newsletter, inviting folks to party on their decks or driveways, which offers social distancing of much more than the recommended six feet.

He also urged them to buy food and beverages from local merchants.

He and Mary were in the spirit, sipping margaritas as the tropical music of Jimmy Buffett played. As if on cue, Buffett’s biggest hit, “Margaritaville,” played in the background.

At the next unit, Sal Grigola stepped out onto his deck.

“What are you sipping there?” Cochrane asked.

“This is a wonderful idea” Grigola added.

One floor below, on a walking path, Harvey Johnson strolled past and paused to chat, looking up at Cochrane.

“I think it’s great,” Johnson said. “Actually, we have a house in Indiana. I drove back just to come here … You did good. This is a good idea.”

Cochrane has time on his hands to think of good ideas.

He had just started a new job selling scoreboards to high schools, colleges and park districts. Then the virus hit.

“Twenty-nine days in to the new job, I got furloughed,” Cochrane said.

“So, I took a part-time job with Jewel,” he said. “I’m a driver for Jewel, doing the home grocery delivery a couple of times a week. Just to get out of the house. Something to do.”

Like many, sheltering at home has daughter Kelly doing her job – she is a counselor at Mercy Home for Boys and Girls in Chicago – from her computer at home.

“I just ended a virtual Jeopardy job skills game with the kids,” Kelly said. “We talk about resumes, workplace conflict, stuff like that.”

Now, though, it was time to enjoy a margarita during “All Hands on Deck.” 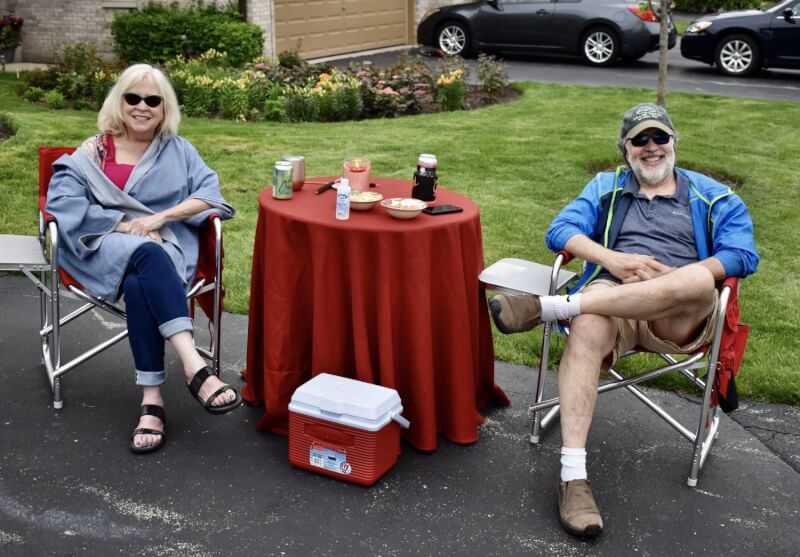 Mary and Jim Demikis took their “All Hands On Deck” party to their driveway in The Windings of Willow Ridge subdivision. Photo by Steve Metsch.

Across the street, Mary and Jim Demikis took their outdoor shindig to lawn chairs on their driveway.

“I think it’s a great idea,” Mary Demikis said. “We’re all cooped up. And now we have to figure out a safe way to be around other people.”

Jim and Mary, married 27 years, consider themselves fortunate because they are both able to both work from home.

Jim had hoped to see more people on their driveways and decks. “It’s not a real mingling community,” he said around 6 p.m., “but it’s still early in the evening.”

Cochrane hopes to bring the subdivision closer with more deck parties this summer.

“I think it’s good for the community,” said Cochrane who has noticed one change for the better during the pandemic lockdown.

“To me, everybody is a lot friendlier and outgoing,” Cochrane said. “Hopefully, that’s going to continue. When I drive, everybody waves to each other and it didn’t used to be like that.”

“We’ll get through this,” he added, “It will just take time.”