Automated lift among many improvements

It took a few moments, but Summit firefighters were able to figure out how to operate an automated, self-loading stretcher during a demonstration to a visitor.

Hey, it takes a while to learn all the bells and whistles in their new ambulance.

They do like the lift because it prevents firefighter/paramedics from possibly hurting themselves when lifting heavier people into the ambulance, Fire Chief Wayne Hanson said. 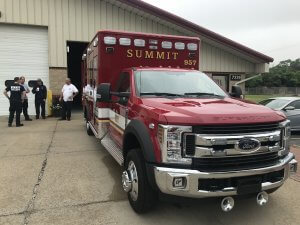 This $250,000 ambulance will soon be on the streets. Photo by Steve Metsch

There are more spacious cabinets inside, easier access to oxygen tanks, and room for a second patient if necessary. LED lighting will help when firefighters open outside doors at night.

The gleaming 2018 Ford F550 Wheel Coach Ambulance could be approved for street duty soon, after it passes inspections, Hanson said.

“We had to install radios for communications, and stock it according to the criteria of the state and Christ Hospital. All we’re waiting for is our license plate. And the state and hospital do an inspection. That could happen this week,” Hanson said.

Lt. Michael Wodarczyk called the new ambulance “awesome,” and noted that the interior has improved, safer seating with five-point harnesses instead of a lap belt.

Hanson noted that mobile computers will be installed this week, too. They keep the ambulance in touch while en route to local hospitals.

Mayor Sergio Rodriguez said it was time: “The ambulance runs all the time. We needed a new one.”

“We get a lot of different calls here in Summit,” Hanson said, “and we report to accidents on the Stevenson Expressway.”

This ambulance replaces a 7-year-old ambulance that will be retained by the fire department as a backup if the new one goes down, Hanson said.

The former backup ambulance, bought in 2004, will move next door to public works department, perhaps for use on cold nights to help keep workers warm, or to carry gear, Hanson said.

Glancing at the new ambulance, firefighter/paramedic Jimmy Brereton said “it’s nice to have a new rig.”

“The other one is showing wear and tear, bumps and bruises. This one is bigger and easier to work with,” Brereton said.

The village board is paying attention to needs, Hanson said, noting the police and public works received new vehicles this year, too.

“It’s nice to see. I think the board sees the need. We’re progressing,” Hanson said.

Next on his wish list is a new fire engine. Hanson hopes to get a grant from FEMA for the purchase. 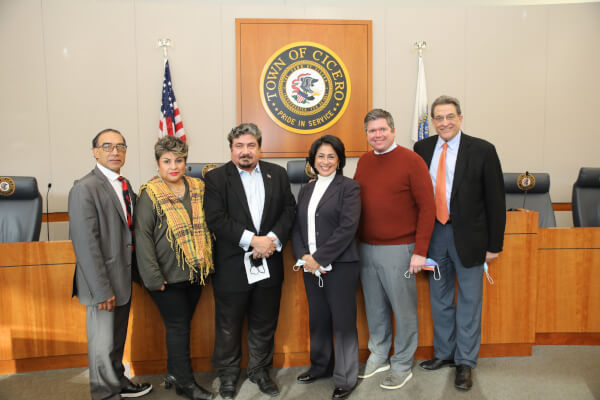