Cities and villages throughout Chicagoland are hosting National Night Out events on Tuesday, August 3 to show support for Police and the difficult tasks they face in confronting criminals.

Over the past two years, police have come under attack as a part of political campaigns often based on exaggerated charges of racism following arrests and shootings of drugged up suspects and criminal suspects.

National Night Out is an opportunity for Americans to show support for the police especially at a time when they are under side from radical activists who are calling to “defund” the Police Departments and are surprisingly receiving support from elected officials at State and Federal levels.

The mixed messages being sent out by the White House, Congress and even some in the Illinois Legislature mandate that we speak out forcefully in support of our police and protection of our neighborhoods. Innocent homeowners and citizens who abide by the law should be the priority when it comes to Constitutional RIghts and Safety, not the criminals who carry guns, use illegal drugs and engage in violence, often hiding behind protests and politics.

Orland Township Supervisor Paul O’Grady, a big supporter of police and fire, urged everyone to participate in National Night Out events and he urged everyone to “turn on their porch lights” to show support for the Police, Fire and First Responders.

“Bringing our communities together is more important now than ever. National Night Out is a safe way to bring our police and citizens together, and I’m more than happy to be a witness of this wonderful campaign,” O’Grady said.

“I understand why some may feel unsafe when it comes to law enforcement and their presence in our area; but it’s vital that we do what we can to rebuild the police-community relationships across the country in order to keep our neighborhoods safe for all. On August 3rd, I encourage ALL Orland Township residents to turn on their porch lights on in support of this event! “

Here’s list of some of the more important National Night Outs that will be hosted. Show your support Tuesday and let our police know that we support them and we have their backs the way they have ours.

Most National Night Out events include not only the local police by the Fire Departments and Fire Districts also, along with community organizations offering information, food, giveaways and providing entertainment.

When: 6 to 9 p.m.  |  Tuesday, Aug. 3, 2021
Where: Freedom Park, 7835 Timber Drive
Join the Tinley Park Police Department at this annual, award-winning event every August. Attendees can meet and greet members of Tinley Park’s Police Department, Fire Department, Emergency Management Agency and Public Works Department, as well as view the many Village-owned vehicles on display. Other activities include family entertainment and booths from local businesses. See the 2021 flyer for more info. 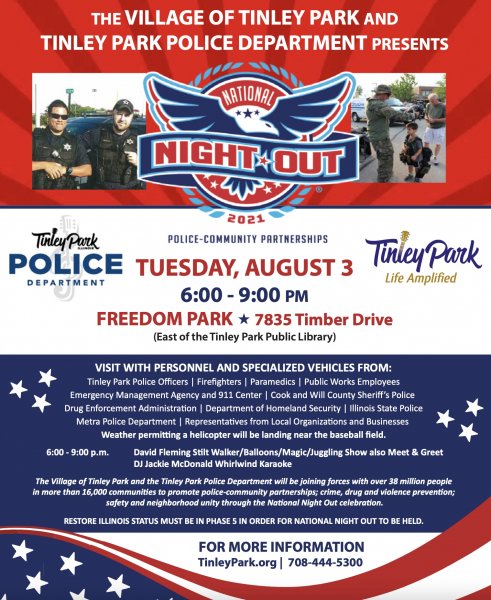 Cicero hosts games and entertainment for families and children providing information on police and fire safety in Cicero’s Municipal Courtyard for this year’s annual National Night Out to be held on Tuesday, Aug. 3 from 5 PM until 9 PM.

A North American tradition held before school starts throughout the United States and Canada, National Night Out is geared to promote public safety through a greater cooperation with police and residents. This year’s program featured live music, free food, games and rides, plus informational booths to learn about Cicero’s Police and Fire departments.

“We have seen unprecedented growth in Cicero’s safety rating,” said Police Superintendent Jerry Chlada, Jr. “Credit must go to the work between the town and the police, but having a bridge of trust with the residents is also a very important part of it.”

“This town does not tolerate gang activity,” Dominick said. “We want to continue to get rid of gang-bangers and maintain a safe community for our kids. It is not possible to do that without neighbors working with the police to prevent gang activity from happening before it starts.”

Cicero’s National Night Out will be held in the Municipal Courtyard adjacent to the Cicero Community Center, 2250 S. 49th Avenue beginning at 5 PM. The evening will include entertainment, refreshments, information on Town and Police and Fire services, and activities for children and families.

National Night Out is a nationwide initiative to promote healthy relationships between the police and their communities. Each community celebrates National Night Out in their own unique ways, and the New Lenox Police Department takes part by offering a free event in the Village Commons for all to attend. The event will include plenty of entertainment and activities as well as free food and treats. This year’s event will take place on Tuesday, August 3 from 6:00 to 8:00 p.m.

Activities
Free activities will be available throughout the event, including bounce houses, a touch-a-truck, vendor tables with prizes and games, and live music courtesy of Dave Bellah. Many free raffles will also be available, so be sure to visit the raffle tables to enter to win a prize!

Admission
Admission to this event is free. Guests of all ages are welcome.

Parking
A portion of Veterans Parkway will be closed during this event to accommodate the event activities.  Limited parking is available on the street. Parking is available in the south lot of the Village Hall, at Old Plank Trail Community Bank, and at Trinity Services.

The New Lenox Public Library is open during this event.  Please help us to treat our neighbor with respect by leaving their parking lot open for library patrons.  We appreciate your courtesy.

Food & Beverages
FREE food will be available at the concession stand thanks to our many event sponsors! Guests can stop by to pick up hot dogs, chips, freeze pops, and bottled water.

Sponsors
This event would not be possible without the support of our many generous sponsors. We are extremely grateful for their generosity and support! National Night Out sponsors include:

National Night Out is commonly called “America’s Night Out Against Crime.” This nationwide event is designed to heighten drug prevention and crime awareness, generate support and participation in local anti-crime efforts, and strengthen neighborhood spirit and police community partnerships. Our events were unfortunately canceled in 2020 due to the COVID-19 pandemic, but in 2019, nearly 50 Naperville neighborhoods participated. During the event, residents in neighborhoods throughout Naperville and across the nation are asked to turn on their porch lights, lock their doors and spend the evening outside with their neighbors, police officers, firefighters and other City personnel. Events such as cookouts, block parties and neighborhood walks will all occur simultaneously throughout Naperville and nationwide.Neighborhoods throughout Naperville will join communities nationwide and participate in the City’s 25th annual National Night Out on Tuesday, Aug. 3, from 5 to 8 p.m. This is a great opportunity to get together with your neighbors to strengthen your community and to promote positive police-community partnerships. Members of the Naperville Police, Park District Police, Naperville Fire, Public Works, Animal Control, Electric and Water Utility departments will visit many of the registered events as time and circumstances permit. Registration is currently closed. If we can assist you in any way in making your event a success, please contact Naperville Police Department Crime Prevention Specialist Julie Smith at (630) 305-5450 or smithju@naperville.il.us.

The Village of Alsip will host National Night Out on Tuesday, Aug. 3. The public safety event runs from 5:30 to 8 p.m. on Mulberry Street, between Orchard and 44th Place.

Immediately following Alsip PD’s National Night Out is a “dive in” pool party and movie from 8:15 to 10:15 p.m. at Sprayfari Aquatic Park, 11930 S. Kostner Ave. (Alsip residents only, proof of residency required.) 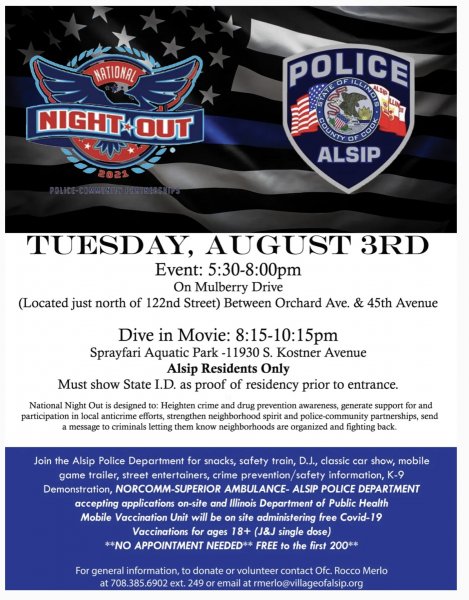 A Senior Parade will begin at 2 PM. A parade will be held from 6 to 9 PM. The Barn/Teen Center at 231 S. Civic Drive hosts a community-wide event for all including seniors.