A Bridgeview restaurant owner and board member of The Mosque Foundation treated village employees to a luncheon as way to say thanks.

Kalid Baste has owned the Al Bawadi Grill, 7216 W. 87th St., for 13 years. He’s also been a longtime member of the mosque, and has lived in the village for decades.

Baste and his employees carted in big trays of food on June 3 to thank the village for its continued support of his restaurant and of the mosque. 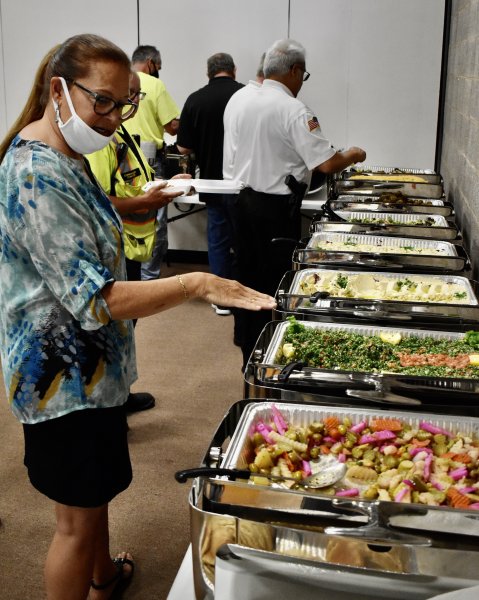 There was no shortage of goodies at the luncheon provided to Bridgeview village employees by Kalid Baste. Photo by Steve Metsch.

Village hall employees, police officers, firefighters, public works personnel and others enjoyed the luncheon that was served in the village board’s meeting room.

“Basically, we’re just showing them appreciation between what they’ve done for us over the years. And we had a holiday (at the mosque) over a week ago,” Baste said, referring to Eid-al-Fitr, the festive conclusion of Ramadan.

In past years, the celebration brought huge crowds – not to mention lots of tasty food as Ramadan fasting ended on that day – to SeatGeek Stadium.

But that was not possible this year with restrictions on large public gatherings thanks to the coronavirus pandemic.

Still, the May 24 event saw bigger than usual crowds to the mosque, 7360 W. 93rd St., dwarfing the usual large amount of traffic seen on Harlem Avenue for Friday worship.

“The police department, the fire department, emergency services, the volunteers, they did an amazing job,” Baste said “In the end, they even asked us, ‘We hope everything went okay,’ as opposed to us feeling bothersome.”

“We caused a lot of traffic,” he added. “This was worse than a Friday.”

It was all smiles at the village hall when workers savored lamb, steak and chicken kabobs, hummus, grilled vegetables, and falafel.

Each person also received “a care package, because a lot of these things are had to come by,” Baste said.

Baste addressed the diners during the luncheon, telling them “for all these years, you guys have been very good to me and my family. We’re grateful for that.”

Oussama Jammal, president of the mosque, said it and the village “have a marvelous relationship, the best that can exist.”

“We have a lot of cooperation, a lot of understanding with one another, a lot of support,” Jammal said. “This is what keeps our village growing, stable and safe. We appreciate working with you.”

“These gentlemen are some of the best, and you know it, too,” Landek told village workers.

“Kal, what you’ve done,” Landek said. “You invested in our community and we really appreciate that. When you take your own money and invest in our town …. He makes our community proud.”