Thrown for a loss

Tim Racki has a glittering record as a high school football coach – taking two schools to nine state title games and winning seven – but his biggest challenge may come this fall.

Not only does Racki not know if there will be a football season – thanks to concerns about the coronavirus pandemic – but he will enter it minus his star player.

Strong-armed JJ McCarthy, considered by many to be the best quarterback in the state, has decided to transfer to IMG Academy in Brandenton, Fla.

McCarthy as a sophomore signed a letter of intent to play for the University of Michigan. Possibly sitting out a year in Illinois would not enhance his goal of starting for the Wolverines, Racki said.

McCarthy announced the move May 18 on his Twitter account. He cited the uncertainty about high school football in Illinois as his reason.

McCarthy, who is entering his senior year, had been on a Nazareth team that played in three straight state title games, winning it all in 2018.

He tweeted that the title games “will never match the friends and relationships I’ve made with my teammates, coaches, teachers and classmates. Naz will always be my family.”

McCarthy also thanked and praised Racki, calling the coach “my mentor and friend for life,” adding “I will always be your QB.”

That, however, will be in spirit only this fall as McCarthy will be throwing touchdown passes to new teammates in Florida not in La Grange Park. 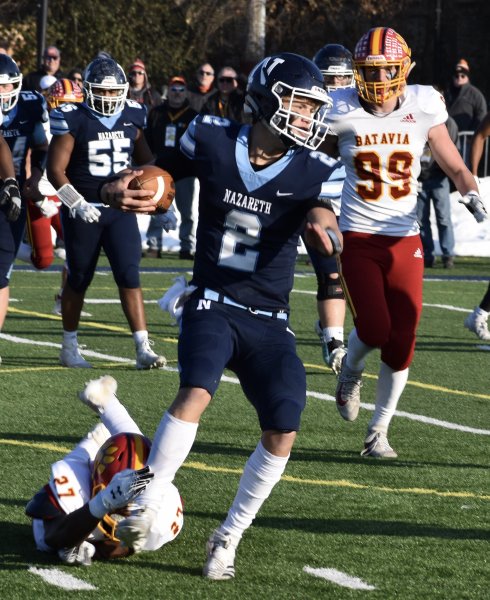 JJ McCarthy is taking his talent right arm to Florida to play football this fall, rather than risk missing the season with Nazareth, given the uncertainty over high school football in Illinois thanks to coronavirus precautions. Photo by Steve Metsch.

Racki said on May 21 that he was surprised by the news. However, given the unknowns surrounding football in Illinois, Racki was not shocked.

“I understand what JJ has to do,” Racki said.

The McCarthy family is not doing interviews, Racki said.

He wishes McCarthy continued success with his new team. McCarthy threw for more than 2,700 yards and 34 touchdowns leading Nazareth to a state title game that was lost to Mount Carmel.

He’s not sure if the entire McCarthy family has to move to Florida, or if JJ can stay in a dorm.

Asked if he had an inkling about the transer, Racki, who is Dean of Students at Nazareth, said: “I’ve been so consumed with the uncertainty … I guess should have saw it coming more than I did.”

“I’m very tight with his father and I understand where he’s coming from,” Racki said. “He wants what’s best for his kid. (JJ) has an opportunity to compete for the starting job in his first year at Michigan. So, you’ve got to really plan for that.”

Racki said he’d support any player on the Naz roster – from JJ to a fourth-stringer – making a transfer to help his football future.

Asked who will be the Roadrunners’ quarterback, Racki said, “when and if we can have competition, we’re going to figure that out.”

“My offensive staff is very diligent in the offseason about what we want to do,” Racki said. “Now, with JJ gone, that changes things dramatically in terms of how we have to adapt.”

Racki said McCarthy “didn’t want to leave, but you can’t roll the dice with something like this.

“I could not in good conscience say ‘Wait it out and see what happens’,” Racki said “Then I’m staring at him in the middle of a hallway in October and we’re not playing football.”

“How do you get better at football, especially if you want to compete for a Big Ten job at Michigan? You have to play football. That’s how you get better.”

Right now, Racki faces the unsettling prospect of his first June in three decades nor running a football camp.

“This will be 23rd year as a head coach, my 29th year coaching football overall. It will by my first June not running a camp. They say nine kids, six feet apart. It will be conditioning, I think. You can’t have a ball,” said Racki, who played football at Southern Illinois University.

And now, a football coach who is one win from his 200th victory is waiting it out with all the high school football players, their parents and the fans.

“I’m the ultimate optimist, all my players will tell you that, but just being a realist. Okay, when is football going to be able to come back? Because it doesn’t look like any time soon,” Racki said.

As a case in point, he noted the six feet of social distancing recommended by the CDC as it applies to the sport he loves.

“How are they going to allow 22 kids on a football field to scrum? That’s what’s concerning,” Racki said. 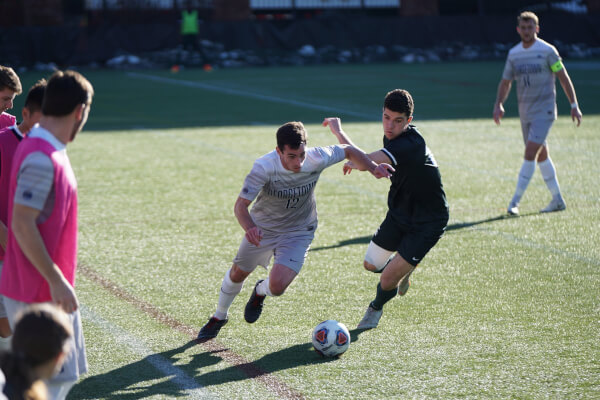 Should there be restrictions in wake of Orland Mall shooting Business