The Town of Cicero hosted a commemoration honoring the legacy and life of the late Dr. Martin Luther King Jr., one of the few Chicagoland suburbs that does more than just see Dr. King as a holiday day-off.  State Rep. Emanuel Chris Welch, of the 7th House District, was the keynote speaker at the event which attracted more than 200 attendees.

Town President Larry Dominick praised Welch and said that the King Commemoration was important reflecting the changes that have taken place in the Town since he was elected in 2005, embracing diversity and recognizing all residents of the community as equal regardless of race, religion or ethnicity.

“Hosting the annual commemoration for Dr. Martin Luther King Jr., is not only an honor for me and for the Town’s officials but also a way to make a statement that what Dr. King stood for is important,” Dominick said. “Too many communities see Dr. King only as a day off. We see Dr. King as someone who sacrificed much to ensure that all people regardless of race, religion or ethnic heritage are treated equally.”

Welch said he was honored to speak at Cicero’s Commemoration for Dr. King noting that the West suburban community has come a long way under President Dominick and the Town of Cicero Board.

“As a black kid who grew up in Maywood, I never believed there would be a day that I would be standing before an audience in Cicero delivering a speech in honor of Dr. Martin Luther King, Jr.  Where I grew up, we were always told to stay out of Cicero,” Welch told the packed audience.

Welch noted the history of racial turbulence in the Chicagoland area and noted that Cicero was often at the heart of those troubles back in the 1950s and 1960s.

But he said in the past 15 years, Cicero has made a dramatic change and he praised Dominick ands the Town of Cicero Board with leading those changes.

“Cicero under President Larry Dominick is a new place.  This is a Cicero that Dr. Martin Luther King, Jr. would be proud of today.  This Cicero is a true sign of progress in our Country today,” Welch said.

“Instead of being scared to enter Cicero, Cicero has become a destination location for many.  A town with over 80,000 residents today welcome almost 30,000 undocumented residents.  And just a few years ago, Cicero was named among the top 20 Safest Cities in America by House Hunt Online.  It’s a place where people of all colors reside; and today, the elementary schools and high schools are among the most diverse in the State.  It’s nice to know that Cicero is a town where lawsuits against the City and the police have dramatically decreased from where they were in years past.”

Welch noted that Cicero was one of the first communities in Illinois to approve the Safe Space Resolution which serves as the basis for protections for undocumented residents.

“Instead of headlines about corrupt politicians, when you google Cicero today, you see headlines like “Cicero will not support, assist or facilitate any actions by ICE in the Town of Cicero.”  Yes!  This is a place where Dr. Martin Luther King, Jr. would be proud,” Welch said.

More than 200 people including two classes from Morton School District 99 and Morton High School District 201 attended the event which was held at the Town of Cicero Community Center, 2250 S. 49th Avenue on Tuesday morning.

Shirley Flores, a student at Sherlock Elementary School District 99 also offered some words of Tribute to Dr. King during the commemoration, as did Malachy from the Class of 2021 at Morton East High school who also offered words of commemoration for Dr. King.

The program opened with the posting of the Colors by members of the American Legion Post 96, including Post 96 Commander Keith Taliferro, former Commander Maurice Perez, and longtime Post member and veteran Richard Matejovsky, and an invocation from Cicero Chaplain and Business License Director Ismael Vargas.

You can watch a video of the event using the widget below: 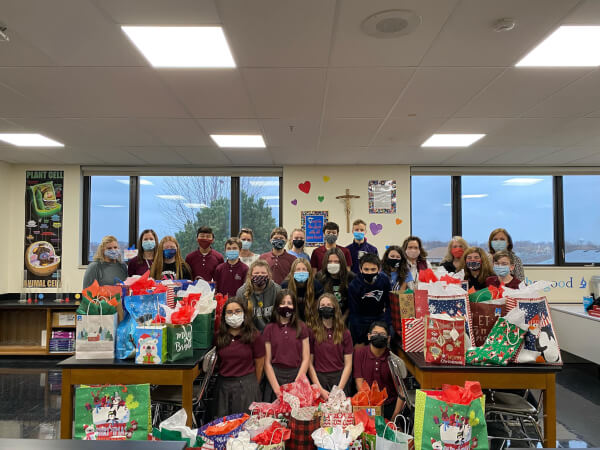