The Central Division champion Chicago Wolves will meet the third-seeded Iowa Wild in the second round of the 2019 Calder Cup Playoffs. The best-of-seven Central Division Finals begins Wednesday, May 1, at Allstate Arena.

Head coach Rocky Thompson‘s Wolves, who dispatched the Grand Rapids Griffins during the opening round in five games, own the home-ice advantage as they continue to fight for a fifth league championship. American Hockey League rules call for a 2-3-2 series when teams are located more than 300 miles apart, so the Wolves host Games 1 and 2 as well as Games 6 and 7 if necessary.

The official schedule for the Central Division Finals:This marks the first postseason clash between the Wolves and the Wild as Iowa earned a playoff spot this season for the first time in the franchise’s six-year history. The Wolves faced the unrelated Iowa Stars in the 2007 West Division Final and took the series in six games, which included a 2-1 record at Wells Fargo Arena. During the 2018-19 regular season, the Wolves and the Wild split their eight meetings. 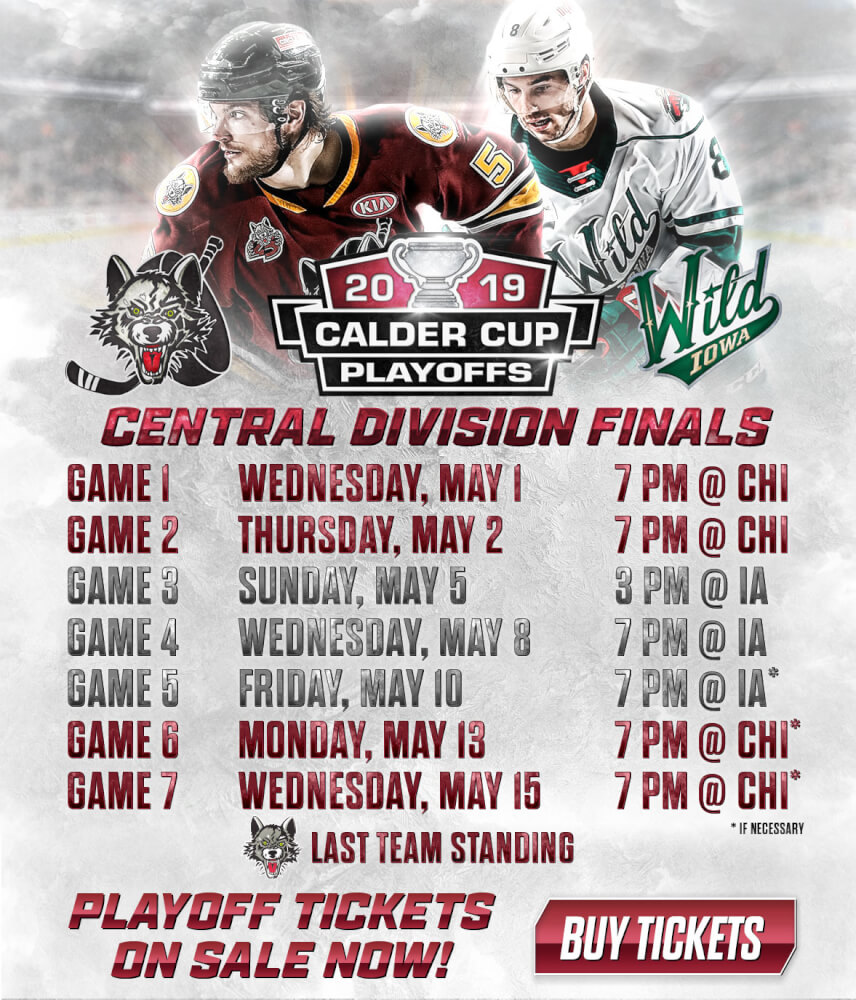 Every home game throughout the postseason will be broadcast on The U Too, which can be found over the air on 26.2 and via cable or satellite on XFinity 230, Dish Network 48, RCN 35 and WOW 170. Fans can see all Calder Cup Playoff games for just $24.99 at TheAHL.com/AHLTV.

To celebrate postseason hockey in Chicago, there’s free parking for all games at Allstate Arena courtesy of your Chicagoland and Northwest Indiana Kia dealers. The arena’s concession stands will feature discounted prices on many items, including beer, soda, hot dogs and pretzels.

Eight teams remain in the fight for the 2019 Calder Cup. The winner of the Chicago-Iowa series meets the Pacific Division Finals champion — either top-seeded Bakersfield or third-seeded San Diego — in the Western Conference Finals.