Throughout his years with Wings, there were two constants by Paul McCartney’s side. His wife, Linda, and Denny Laine.

Linda has since passed away. But guitarist/singer/songwriter Laine is still going strong, as evidenced by his solid concert Thursday at night at the Arcada Theatre in St. Charles.

Laine, 74, brought The Moody Wing Band to the intimate 900-seat theater. It was not sold out.  I was surprised to buy a $39 ticket on the main floor one hour before the opening act. I figured Wings fans would come out in droves as it was announced he’d play the entire “Band on the Run” album. Their loss.

Laine nearly played the entire album – for some reason, he skipped “Helen Wheels” – albeit with mixed results.

As singers age – consider Sir Paul in Tinley Park in 2017 – it’s sometimes difficult for them to hit the higher notes. Such was the case at times Thursday night for Laine, whose voice got gritty on some songs. It was noticed on the title track. He left the lead vocals to bandmates a few times, with good results, And I couldn’t help but notice that when he sang in a lower register, his voice sounded stronger with less straining.

There’s one thing that age doesn’t diminish for most musicians, and that’s their playing. Laine can still play a mean lead guitar. He had a couple nice solos, especially his bluesy take on “Let Me Roll It” that resulted in a standing ovation. And he was jamming with the band during “Nineteen Hundred and Eighty Five” which closes the album. 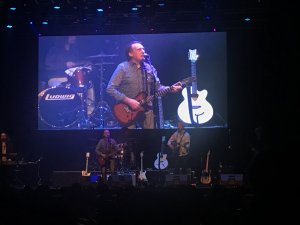 There was little doubt he was pumped up for the show as he bounded around the stage with enthusiasm, smiling and sometimes inviting the fans to sing along. There’s nothing like hearing hundreds of voices singing “ho, hey, ho” during “Mrs. Vandebilt.” He had a nice guitar solo and his voice sounded better singing “No Words.”

A highlight for me was when the band tackled “Picasso’s Last Words.” It’s a challenging song with frequent chord and tempo changes throughout. But Laine and company were up to the task, nailed it and sounded fabulous.

After playing the “Band on the Run” album, Laine dove deeper into the Wings catalogue.

While Laine didn’t chat much during the show, he did mention “I’m not sure if this was a hit here, but it was a hit song in Europe” before he and the band launched into “Mull of Kintyre.” There were no bagpipes, unfortunately replaced by keyboards, but the ballad was terrific. I liked how he told the crowd “come on, sing it for Linda.” We did.

He also played songs he wrote for the popular ’70s rock band: “Again and Again and Again,” “Deliver Your Children,”  and “Time to Hide,”

The encore was “a couple Paul wrote for me to sing,” The haunting “The Note You Never Wrote” was beautiful live, while the rocking “Spirits of Ancient Egypt” features some of those what-was-Paul-thinking lyrics like “I can drive a Cadillac across the Irish Sea.” Hey, it was the ’70s.

Being a former member of The Moody Blues, Laine started the show with some songs from their 1965 album “The Magnificent Moodies,” including a solid version of “Go Now,” which was featured on the “Wings Over America” live album.

If I can have one beef, I would have liked to hear some stories about the experience of recording “Band on the Run” in Africa, along with some yarns about working with McCartney. I guess Laine is saving those for tonight. He has a solo show set for 9 p.m. at Evanston Rocks. Tickets are $25. That’s a bargain to spend the evening with a Rock ‘n’ Roll Hall of Fame member.

Speaking of the Hall of Fame, another member got its dues with the opening act. Dream Police, a Cheap Trick cover band, played a 10-song set.

I’ve never seen Dream Police before, but will see them again. I was impressed by lead singer Tony Ocean as he took on the formidable task of sounding like Robin Zander. That’s not easy. Zander has one of the best voices in rock. He’s up there with Elvis and Freddie Mercury in my book. But Ocean managed, overall, to do a pretty good job, notably on a moving cover of “The Flame” and a rollicking “If You Want My Love.”

The song “Dream Police,” complete with Rick Nielsen’s fun rap in the middle, was very good. And I really liked how they started with “Stop This Game” instead of  “Hello, There.” Cheap Trick has opened with the latter song forever, but “Stop This Game” opened their 1981  show at ChicagoFest, one of the best concerts I ever saw in that late and great music festival.

Oh, and hats off to Tommy Burke who channeled his inner Bun E  Carlos and pounded his drum kit with great enthusiasm, although there was no cigarette dangling between his lips.