Lyons Mayor Christopher Getty and other elected officials are calling for sweeping changes at Lyons School District 103 after it was learned a sixth-grade teacher who has been charged with attempted murder was hired in August.

Getty, the father of a young daughter, said that as a parent, he is ‘”outraged by the failure of this school district.”

“We must put measures in place at the state level to stop individuals who are charged with heinous crimes from working in our schools with our children,” said Getty, who wants two interim superintendents to step down. 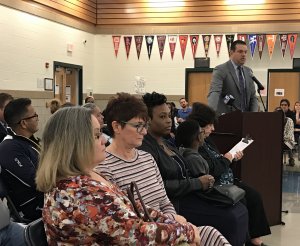 An outraged Lyons Mayor Christopher Getty addresses the Lyons School District 103 Board Monday night. He demanded the resignation of the two interim superintendents and the board president after a teacher charged with shooting a man seven times was hired. Photo by Steve Metsch.

“There is needed legislation. I hope this will be an impetus so we don’t run into this situation again,” she said. “We followed the protocol we had. We did what we were supposed to do.”

Reading a statement during the meeting, Hubacek said the board became aware on Oct. 18, and placed the teacher on administrative leave until the review is completed. He is being paid, she said.

The controversy is over the hiring of Andres Rodriguez, who in August was brought in to teach sixth grade English at George Washington Middle School.

In July 2017, Rodriguez, 40, was charged with seven counts of attempted murder and a felony assault charge after he shot a motorist seven times after a traffic altercation in Tinley Park.

Earlier and down the street at the Lyons Public Library, Getty and other officials called for swift action and spoke of state legislation they say would prevent a hiring like this from ever happening again.

School board member Jorge Torres called on Madonia and the other interim superintendent Patrick Patt to resign, saying they “failed the parents and students of District 103” by hiring Rodriguez.

Officials said last week a Google search by another teacher found out about Andres Rodriguez’ arrest.

“It’s a horrific case. Again, he fired seven shots into a human being over road rage, standing over him and firing into him when he was down, according to witnesses,” said Cook County Commissioner and McCook Mayor Jeff Tobolski.

“We need to make sure this doesn’t happen again,” Tobolski said of the hire.

With that in mind, State Sen. Martin Sandoval (D-11tH) will be introducing legislation in Springfield.

“My outrage is directed toward the board chairman, Marge Hubacek, who hired these two part-time interim superintendents.

Sandoval is calling for clearer disclosure practices for Illinois teachers after Rodriguez was allowed to teach in multiple suburban school districts while facing charges of attempted murder.

“It’s troubling. It’s even more troubling that he could slip through the cracks and be hired by another school district without disclosing this charge,” Sandoval said.

Sandoval said he will direct the Illinois State Board of Education to conduct an investigation into the hiring and disclosure practices at the three school districts – Lyons, Joliet and Cicero – where Rodriguez was employed.

“Failure of disclosure should be immediate grounds for dismissal,” Sandoval said, urging the resignation of Hubacek and the firing of the interim superintendents.

The sometime noisy meeting was split between those who supported the school board and those who agreed with more stricter action advocated by Getty and others.

Torres speculated that the school district officials knew about Rodriguez’ past. “I think so because of the way he got put through,” he said, but added he has “no clear evidence of that.”

Torres did not vote in favor of Rodriguez’ hiring because it was included in a larger consent agenda and he was not comfortable voting “yes.”

Tobolski said it would have easy to check on Rodriguez’ background using a cell phone.

“We all have Google on our phones. I don’t care if the guy’s name was Stash Rodriguez. If you Google Rodriguez, this guy’s picture comes up,” Tobolski said.

“We need accountability. Let’s move forward and put procedures in place so this doesn’t happen in the great community of Lyons again,” Tobolski added.

Getty said “with this happening, we have to look at all the hires.”

“We have to make sure there’s not an individual out there who’s committed a crime, who is accused of crimes, that’s in our schools every day teaching our children,” Getty said.

As expected, the board immediately went to executive session at the start of the meeting. If the plan was to convince people to leave, it didn’t work. Thirty-eight minutes later, the board returned to a packed room. 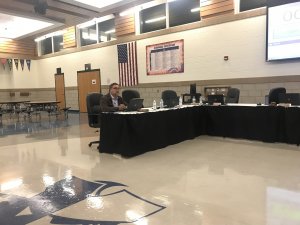 Lyons School District 103 board member Jorge Torres sits in silent protest after other members went into executive session. Michael Bennett also refused to go to executive session, saying the issue of hiring a man charged with shooting a man in road rage was being ignored. Photo by Steve Metsch.

Two board members, Torres and Michael Bennett, refused to go to executive session. Both sat at the board table to protest what they said was the board’s attempt to avoid the issue.

“They changed the agenda at the last minute to misinform the public,” Torres said.

Bennett said the board “is running away because they don’t want to give answer. This is a little odd if you ask me.”

People came looking for answers, Bennett said. “It’s a stall tactic, hope some people leave. Then they’ll come out and say they can’t talk about the issues.”

Bennett would like to see the board president and interim superintendents resign: “That’s a good idea. It would help bring confidence to the community that we’re going in the right direction.”

One woman, who declined to give her name, said “the proper steps were followed. The issue is he went under the table and lied to us. He’s the issue, not the board.”

During the public comments part of the meeting, speakers talked of supporting the board while others demanding resignations. Speakers are limited to three minutes with a maximum of 15 minutes on any topic, Hubacek said.

One man said he was “not happy with what happened,” but has “every confidence in the board that they will do the right thing.”

Joi Conley, the mother of a student, called the district “unstable” noting four of six principals were replaced last year.

“How can the board be effective when the members rarely and, in some ways appear to purposely not see eye-to-eye? Conley said.

“Lyons School District 103 welcomed an extremely violent person into our school district and gave him an open invitation and easy access to our children, their teachers and other staff members to possibly commit another heinous crime,” Conley said.

“Shame on all of you,” she added to applause. Who will the school board hold accountable for this preposterous decision?”

The board does not read job applications, board member Shannon Johnson said. Hires are based on recommendations from staff and principals, she said.

“If any of you would come to a board meeting more than once ever,” Johnson said, “you’d know the correct process.”