“Just run at the football (and) put your hands up,” Hatter said. “It’s that simple.”

While it may be simple, it can also be quite effective.

The 6-foot-2, 245-pound senior blocked a punt during Downers Grove North’s second possession on April 16 and didn’t stop there.

As the football bounced toward the end-zone, Hatter had the presence of mind to chase the ball and fell on it out of the end-zone. The safety gave Lyons a 2-0 lead late in the first quarter.

“First instinct,” Hatter said. “Go after the ball when you see it on the ground.” 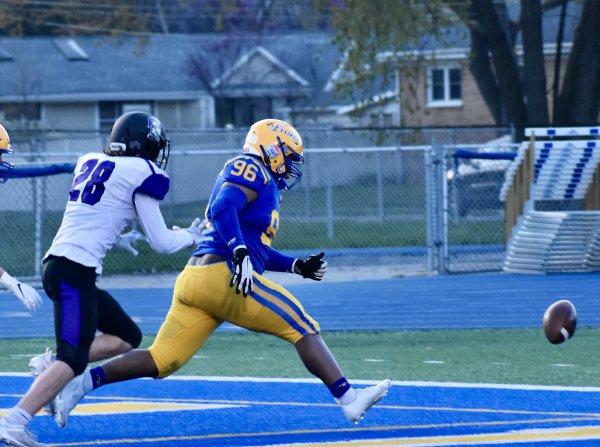 Each team has lost games to the coronavirus pandemic in what wide receiver Rafeon Kloes called “a weird season.”

While it’s not the senior season he envisioned – fewer games in the spring – Kloes made the most of his third game.

Kloes returned a kickoff 63 yards to set up one touchdown after he earlier scored on a 62-yard pass from junior quarterback Joe Antonietti.

“I burned the kid off the line,” Kloes said. “Felt good.”

His touchdown came on a first-and-10 play at Lyons’ 38-yard line with 6:58 left in the second quarter.

The ensuing point-after by junior kicker Marko Dubak made it 9-0 Lyons.

Lyons Head Coach Jon Beutjer noted the team had big plays on defense all night. One of the biggest was by junior defensive back Owen McManaman.

That play held Downers Grove North to a 28-yard field goal with 1:56 left in the first half.

“We felt Downers Grove (North) was very balanced,” Beutjer said. “They could throw and run, watching them on film. I think our defense did a great job. They played hard.” 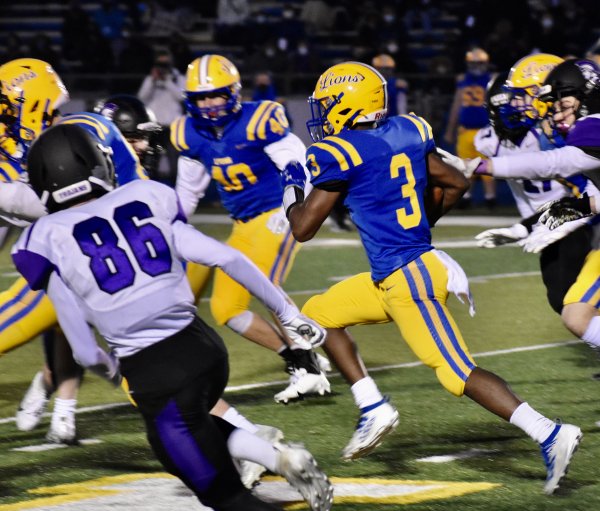 So did Kloes, who after the field goal caught the ensuing kickoff at Lyons’ 10-yard line and returned it to the 27-yard-line of Downers Grove North.

“I saw a hole to the left and I just hit it hard,” Kloes said. “I tried cutting it back, but couldn’t get there.”

After Kloes’ big return, Antonietti darted 19 yards on the next play to the 8.

Antonietti lost two on the next play, then passed 10 yards to  freshman receiver Noah Pfafflin for a touchdown and 16-3 lead with 46.8 seconds left in the first half.
“He’s such a fierce competitor, a hard worker, detail oriented,” Beutjer said of Antonietti. “He’s starting to understand weakness in coverages and that showed tonight.”

After Downers Grove North went three-and-out to start the second half, Lyons took over at its own 46-yard line.

Two plays later, freshman running back John Cheney took a handoff from Antonietti, darted left, and raced 39 yards to the pylon. Lyons led 22-3 with 8:53 left in the third quarter.

“You wouldn’t know (Cheney and Pfafflin) are freshmen,” Beutjer said. “They prepare like seniors.”

The pandemic limited attendance to family members of players and marching band members. It was a small but loud group.

“It was nice for our seniors especially,’ Beutjer said of the home victory.

“It’s been a long year for them and they’ve been so patient and resilient,” he said. “They’ve worked hard and stayed committed to the program.”