U2 rocks and preaches

Band gets messages across in dazzling concert

When a band  has been a staple on radio stations for 38  years, its easy to phone it in. Play the big hits known by even the most casual of listeners, toss in two or three new songs, and call it a night. Chances are, most of the fans will go home happy.

But U2, the best Irish export not named Guinness, isn’t like most bands.

The veteran rockers brought their “eXPERIENCE + iNNOCENCE” tour to Chicago Wednesday night – the second of two nights at the United Center – with an urgency and passion that’s seldom seen. Of course, there was a bit of preaching involved. It wouldn’t be a U2 concert without frontman Bono, he of the many noble causes, making a sermon or three. And that’s okay.

Most fans know what to expect. Those who don’t may have been troubled to see images of Neo-Nazis on the huge video screen, or to hear reminders about “Comrade Putin,” poverty, hunger, and the lack of equal rights for women. Guess what? It’s good to have your eyes opened now and then. A little constructive criticism can go a long way.

That said, the band let Bono do all the talking. Nothing new there.

The Edge was dazzling on his jangly, chiming lead guitar. How can one guy make so many sounds? Adam Clayton, whom Bono jokingly saluted for looking good in his white tuxedo jacket, was solid as always on bass. His backbeat partner, drummer Larry Mullen, Jr., pounded a variety of drums all evening. Together, the three provided an amazing array of music behind Bono’s vocals. And, yes, Bono’s voice, at age 58, is as strong and diverse as ever.

Using a stage setup similar to one seen on their last visit to the United Center  in 2015. the band employed a long bridge of sorts that ran the length of the main floor to a smaller, circular stage. A huge videoboard covered the bridge now and then, and a variety of videos and special effects were seen. Having the smaller stage helped bring the band closer to fans throughout the arena, a definite fan-friendly touch. 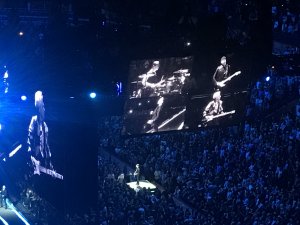 Several video screens in the United Center helped bring U2 closer to its fans during Wednesday night’s concert. Photo by Steve Metsch

Things started with U2 inside the screen covering the bridge, playing two new songs, the haunting “Love Is All We Have Left” and the pounding “The Blackout,” a hard-driving rocker. The lads then made it to the main stage where they dug way back to the start for “I Will Follow,” still a rollicking good time, and “Beautiful Day,” fresh as ever.

But this night wasn’t about churning out the greatest hits. It wasn’t a repeat of last year’s tour marking the 30th anniversary of “The Joshua Tree” album.  It was more about reflection and looking at what the band has learned over the years, as exhibited by playing a good chunk of songs from the past two albums, “Songs of Innocence” and “Songs of Experience.” The latter debuted at No. 1 in December, giving U2 at least one such album each of the past four decades.

I really enjoyed the lovely ode to Bono’s mother, “Iris (Hold Me Close)” followed by “Cedarwood Road,” from the 2014 album “Songs of Innocence.” The latter song is about the street Bono grew up on in Dublin. And he was able walk down his street using effects on the long video screen. Pretty cool stuff.

“Sunday Bloody Sunday,” one of the band’s biggest early hits about a massacre in Dublin, received a scaled-down, softer approach. I don’t know. I think that song needs to be pounded out to drive home its message. Don’t hold back. Rock the house. Bono’s attempt to lead fans in a chant of “no more war” received a tepid response.

The Edge may not have talked, but his stellar backing vocals were heard loud and clear throughout the evening, notably on the new rocker “Red Flag Day” with the UC bathed in crimson  lights; and the acoustic “Staring at the Sun,” featuring just he and Bono on the small stage.

That’s where the band really rocked with a stirring trifecta of  “Elevation,” “Vertigo” and “Desire.” a song which Bono, again talking of the tour’s theme, discussed how- ahem – in earlier days the band thought “who needs innocence when experience looks like so much fun.” It was an amusing moment.

In a night filled with bright spots and just a few miscues, one of the best moments was “Pride (In the Name of Love).” You could tell the band still enjoys playing tribute to Rev. Dr. Martin Luther King, Jr.  “Get Out of Your Own Way,” another song off the new album, was well received. That was followed by “American Soul,” an arena rocker that fell kind of flat despite a huge American flag that suddenly appeared as a backdrop. It seemed as if the band was pandering for support.

However, the encore of “One,” “Love is Bigger Than Anything In Its Way” and “13 (There is a Light)” made for a beautiful, soulful finish, one that reminded fans of the need – now more than ever? – for understanding.

As noted earlier, this wasn’t a two-hour greatest hits show. U2 can do that its sleep. Instead, U2 took a few stands, played a lot of new music, and left the crowd wanting  more. Isn’t that what rock ‘n’ roll is  all about?

“They lost the war” News