Kris Aguilar has long wanted to help people. And, he doesn’t mind dashing into burning buildings. Put those two qualities together and he’s ready for his new job.

Aguilar, 29, was sworn in as a Bridgeview firefighter/paramedic by Mayor Steve Landek at the May 16 meeting of the village board.

“He’s a local guy from Bedford Park. We’re happy to have him. He has a lot of experience. He’ll be a good addition to our department,” Landek said. 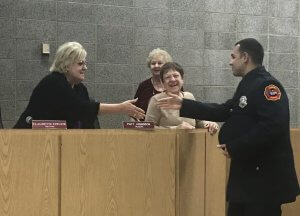 Kris Aguilar prepares to shake hands with Village Trustee Claudette Struzik after he was sworn in to the fire department. Photo by Steve Metsch.

Aguilar has worked part-time for fire department at Roberts Park and Forest View where he “learned a lot.”

Being a full-timer now “is absolutely amazing,” he said. “I’ve been waiting for this a long time and I’m really excited to get started.”

He enjoys the “go-go-go” atmosphere of working at a fire department.

“It fits my personality, helping people out. It’s a paramilitary job. I was in the service prior to this,” he said.Aguilar said he served in the Army for three years, including one in Afghanistan. He was an E4 Specialist.

Aguilar grew up in Bedford Park and is a graduate of Argo High School and Moraine Valley Community College. He and his wife live in Bridgeview Gardens

“It’s nice to have someone from the community. And, he’s a seasoned, experienced firefighter. That makes a big difference,” Daly said.