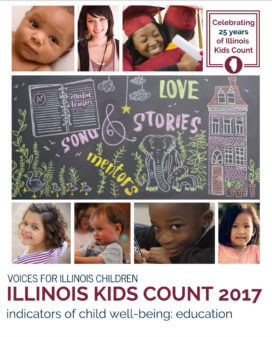 2017 ILLINOIS KIDS COUNT Data Book Shows That Despite Progress, The State Must Work Harder To Address The Barriers Facing Low-Income And Minority Children

Voices for Illinois Children has released the 2017 ILLINOIS KIDS COUNT Data Book finding that Illinois children’s educational success drastically varies based on the county in which they live. The data proved that large gaps in achievement and attainment, across the state, disproportionally impact low-income and minority children in communities that lack funding for quality educational programming.

“The data in the 2017 KIDS COUNT Data Book clearly proves that tobuild a future for Illinois where every child is a high achiever, we must reduce systemic inequities and increase support for the students who need it most,” said Tasha Green Cruzat, President of Voices for Illinois Children.

“It’s time for leaders across Illinois to fulfill their promise to all our children by providing adequate revenue for quality and competitive programming. We must close the achievement gap and give children, in every community, the tools they need to reach their full potential.”

Through recent policy and budget changes – specifically affecting early childhood education programs, K-12 funding, school breakfast options, after school program access, high school and postsecondary alignment – Illinois has taken steps to reduce educational inequities for children across the state. The 2017 KIDSCOUNT Data Book concludes that in order to build on the State’s foundation and continue the progress of these policies, Illinois must raise additional revenue.

The 2017 KIDS COUNT Data Book concludes Illinois will only make systemic gains in education for all groups of students by:

“This information shines a clear light on where Illinois has made progress and where challenges remain,” said Anna Rowan, KIDS COUNT Manager at Voices for Illinois Children. “The expansion of access to early childhood education is promising, yet too many children still lag behind and graduate high school without the tools they need for college and a career. While new policies are a step in the right direction, we must continue to make necessary investments, especially in low-income and minority communities, so every child has the chance succeed.”

Voices for Illinois Children is the leading statewide, non-partisan advocacy organization that creates and utilizes policy research and analysis, policy advocacy, strategic communications and community engagement to advocate for and support policies and programs that improve the quality of life for children throughout Illinois. Over the past 30 years, Voices for Illinois Children has successfully advocated for a range of impactful policies including quality preschool, a fairer local tax system, and health insurance for low-income families.

To download a copy of the 2017 KIDS COUNT Data Book as well as detailed fact sheets for the 40 largest counties in Illinois, visit