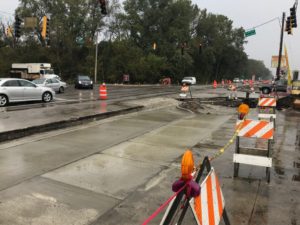 Harlem and 47th getting new lanes

Intersection is among many improvements to Lyons

Decades of frustration for motorists who want to turn onto 47th Street from Harlem Avenue will soon be coming to an end, Lyons Mayor Christopher Getty said at a meeting of the Lyons-McCook Business Association.

Three turn lanes are being added to the busy intersection.  Two are from Harlem to 47th, one is from 47th to southbound Harlem.

That’s one of the many infrastructure improvements Getty discussed at a recent meeting in the village hall’s community room.

“Harlem Avenue is getting redone from 26th Street to Interstate 55. The section that involves Lyons is from Ogden Avenue to I-55. That’s a total resurfacing of that road and some sewer work. That’s why it’s taking so long. If you drive on Harlem, it’s been brutal, especially near the viaduct close to I-55,” Getty said.

However, the end is near.

“We’ve got a hard date from the state of that (work) being done by Nov. 20. A positive update is they are adding three turn lanes at 47th Street and Harlem Avenue. That will greatly enhance that corner and make it a lot easier to pass through there,” Getty said.

Other road projects are also nearing completion, he told those gathered.
Prescott Avenue is being repaved for two blocks south of Ogden Avenue, Getty said.

Collins Avenue, from Joliet to Amelia, is also being redone. “That’s in conjunction with a Community Development Block Grant, which is federal funds (made available) through the county that we got last year,” the mayor said.

“We’ve tied in work at the firehouse at Joliet and Collins. We tore down the former firehouse and we’re now putting in a parking lot for the firefighters. We’ll make sure it matches the façade of the firehouse. It will hold 14 vehicles,” Getty said.

Fire Chief Gordon Nord, Jr. said a firefighter memorial will be added to the parking lot. The design has yet to be determined, he said.

Work on Custer Avenue, from Ogden Avenue to Salt Creek, “is about 99 percent done” with help from the village of Brookfield, Getty said.  South on Custer, from Ogden to 47th Street, will be worked on next year, he said.

Getty noted the new crosswalk on Lawndale Avenue, just north of the village hall, links Smith and Veterans parks. “We had to cut the curb and re-do the sidewalks there,” he said.

“We applied for a grant through ComEd, and were awarded a $10,000 to put in lighted crosswalk signs there, so we’re going to work to put those in at this location. We are also planning crosswalks for the Cook County bike trail that goes through town. Those would be at Ogden Avenue, Joliet Road and 47th Street. Those will probably take another two years,” Getty said.
Two alleys in the village were paved this year, and “we’re planning (more) alleys for 2018.”

The village has received $300,000 in community development block grant funds – “the highest dollar amount of any community in Cook County” — for a water main project near Washington School along Leland Avenue between Salisbury and Ogden, Getty said.

“I continuously push to do infrastructure projects in Lyons,” said Getty, who then invited those at the meeting to contact the village regarding any specific projects they may have in mind.