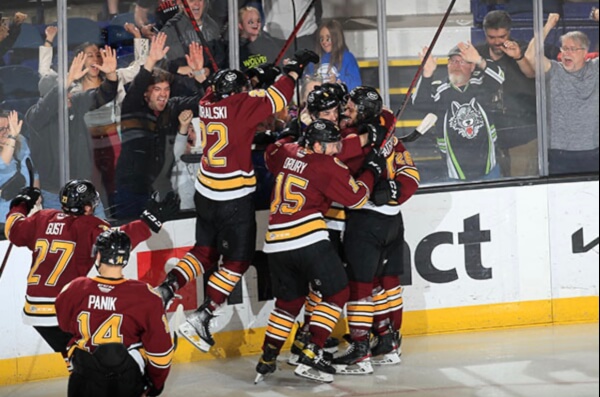 Rookie center Jamieson Rees’ rebound goal 2:26 into overtime lifted the Chicago Wolves to a 5-4 victory over the Stockton Heat in Game 1 of the Western Conference Finals Friday night at Allstate Arena.

Richard Panik set up Rees’ game-winner with a shot from the point. While Stockton’s goaltender scrambled and the nearby defenseman fell down, Rees corralled the puck just outside the crease and flicked it home.

The teams return to Allstate Arena for Game 2 at 7 p.m. Monday.

“I was just kind of battling out front trying to get position,” Rees said. “(The puck) stopped right in a good spot for me and I just pulled it in, threw it on net and it went in. That’s all that matters.”

The Wolves jumped on top during their first power-play opportunity. Captain Andrew Poturalski, working along the left half-wall, spun the puck back to Joey Keane at the left point. He rifled a shot into traffic that ricocheted directly to Leivo at the right faceoff dot for a quick one-timer and a 1-0 lead at 6:09 of the first.

Stockton answered with right wing Luke Philp’s first goal of the postseason at 9:11 of the first, then added two goals on back-to-back shots in the opening five minutes of the second period. Walker Duehr burst between two defensemen for a breakaway at 2:43, then Eetu Tuulola scored from the left corner at 4:11 for a 3-1 lead.

“We realized (what we’re facing) pretty quick when we were down 3-1,” said Wolves head coach Ryan Warsofsky. “They’re a fast team. They shoot for offense quite a bit. If you get caught sleeping, they’re going to make you pay.”

The Wolves redoubled their efforts and forged a 3-3 tie by the 12:50 mark. Chicago pulled within one when Winnetka native Jack Drury intercepted a clearing attempt in the neutral zone, drove down the left wing and found Chatfield in stride for a snapper from the right circle. Chatfield’s first postseason goal as a pro made it 3-2 at 9:50.

Chicago drew a penalty shortly thereafter and controlled possession throughout the subsequent power play. With time on the man-advantage winding down, Drury whistled a blast that deflected off a defenseman past the net. Noesen claimed the puck along the back wall and dished a nifty backhand to Leivo at the top of the crease for a quick poke past goaltender Dustin Wolf at 12:50.

The Wolves regained the lead on Noesen’s power-play goal at 10:26 of the third. Keane launched a shot from the point that hit traffic. Drury and Noesen battled for control of the rebound and the AHL’s regular-season goals leader swatted it home for a 4-3 edge.

Just 59 seconds later, Stockton forged the game’s third tie as defenseman Andy Welinski whistled a long stretch pass that caught Connor Zary in stride ahead of a defenseman for a quick flick and a 4-4 tie at 11:25.

Wolves goaltender Alex Lyon (7-1) posted 24 saves in the win while Wolf (6-2), voted the AHL’s Goaltender of the Year, rejected 35 shots.

The Wolves host Game 2 at 7 p.m. Monday at Allstate Arena before traveling to California for Games 3-5. If necessary, the Wolves will host Game 6 on Tuesday, June 14, and Game 7 on Wednesday, June 15. For the best ticket deals, visit ChicagoWolves.com/Playoffs or contact a team representative at WolvesTix@ChicagoWolves.com. 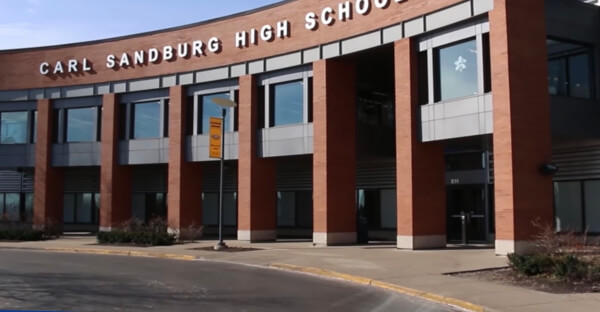 D230 Board, staff to present at statewide education conference Education