Monday night’s meeting of the Summit Village Board had a law enforcement flavor.

Each was unanimously approved by the village board.

Otto said he and his family are soon moving to Florida. Otto, 50, said he started as a police dispatcher in Summit, and was in communications for two years.

He does not plan to seek work in law enforcement in Florida.

“I have enjoyed working here. It’s been my pleasure to serve the people. There are a lot of memories, but it’s the little stuff. It’s helping the crying kid, helping a homeless family find a place to go. You see so much ugly, you have to remember the good,” Otto said.

Chief John Kosmowski called Otto “a dedicated man. I wish we had 10 like him.” 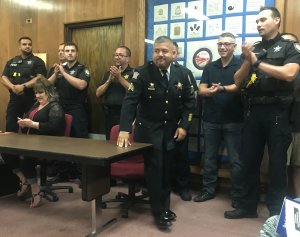 Summit police applaud as Mel Ortiz was promoted to lieutenant during Monday night’s village board meeting. Photo by Steve Metsch.

Ortiz, who will mark his 20thyear with the department in September, becomes the first Hispanic police lieutenant in Summit.

“I’ve been a detective for about four years. Moving to lieutenant is an opportunity to have more responsibility, to assist the officers, and helping out the community,” Ortiz said.

“It’s a very diverse community. You’re not pigeon-holed to one type of work. It’s a good place to learn how to be a police officer. It’s a great place to have a career,” Ortiz said.

Kirkolis, who grew up in Summit, is in his 29thyear with the police department.

“It’s great. I’ve been looking forward to the next step. I’ve been close a couple times and finally got it,” Kirkolis said.

Working in his hometown since 1989 has meant a lot to him. “My parents still live here so it’s good,” said Kirkolis, a St. Rita High School graduate.