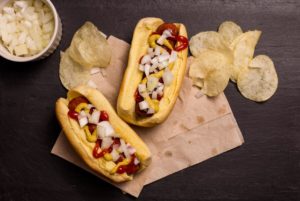 Ray Sierakowski said it “felt like home” when he eating a hot dog Oct. 23 at The Dugout.

Hey, it’s been more than four months since he could enjoy food at his favorite restaurant in Burbank. “I went to a few other places,” he said, “but it wasn’t the same.”

The Dugout, 6300 W. 79th St., is back in business after fire swept through the 875-square-foot building on June 14, closing it down. That’s a long time between hot dogs.

“I’m very happy to be back. I was lost. They’re real friendly here. The food is terrific. I couldn’t wait (to return),” said Sierakowski, 87, of Burbank.

Sierakowski was among the many devoted customers who came out to enjoy the food and, perhaps more importantly, to visit with owner Mike DiStefano.

When he wasn’t working the counter, DiStefano was busy chatting with regulars, something he enjoys perhaps more than preparing the food that last year earned The Dugout a spot in the Vienna Beef Hot Dog Hall of Fame.

“I never had a day off from work (before) in 33 years. I’ve got to tell you, it feels good to be back,” DiStefano said. “We had an extremely busy lunch today. All the old-timers were here.”

Burbank Police Chief Rick Shore, 52, was among those “old-timers.”

“It’s awesome. It’s another good business in Burbank. Solid revenue. Good food. And, you can’t ask for a better owner to be in our town,” Shore said.

Shore, “a cheeseburger or a hot dog guy,” opted for the former.

“I went with American cheese, but I’m still like a little kid, ketchup only,” Shore said with a laugh. His cheeseburger was tasty, as he expected.

“I love the fries here, but I don’t need them,” he said, sneaking a few between bites of his cheeseburger.

Employees were busy Monday getting accustomed to the new kitchen, not to mention working The Dugout’s first drive-thru window, Chris Molitor said.

“It takes some time getting used to the new stuff,” said Molitor said as she cleaned the fryer.

A lifelong Burbank resident, Molitor has worked at The Dugout for three years.

“It’s nice to see all the regular customers, people from the neighborhood. It wasn’t that bad at lunch because we were all here (working),” Molitor said.

The drive-thru “is okay so far, but will take some time getting used to,” she said. Molitor encouraged customers to phone first, especially for larger orders, and then pick up their food at the window.

“We don’t want you to stand here and wait around,” Molitor said.

If there is a wait, customers can check out all the Chicago sports memorabilia, spared damage in the fire, displayed on the restaurant’s gleaming white walls.

Around 5 p.m. Oct. 23, DiStefano posted on The Dugout’s Facebook page about how happy he was to be back in business, thanking “our amazing customers.” In just four hours, 126 of those amazing customers had liked the posting.

That was a low-key, soft opening, “but we’re going to do a big grand opening in a couple weeks,” DiStefano said.

An NHL official who works at each Blackhawks game in the United Center, DiStefano said he is trying to get someone from the hockey franchise out for the grand opening. A date has not yet been announced.