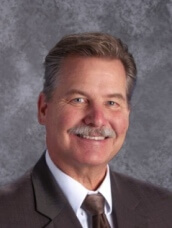 District 230 Superintendent Dr. James M. Gay shared with staff on Monday his intent to retire at the end of the 2020-21 school year.

“Today, I share with you that I am nearing the end of my chapter in the District 230 history book,” Dr. Gay shared with all staff members through a live-streamed Institute Day presentation from the Administration Center to the schools. “I have had long conversations with my wife about this decision over the past couple of years and last semester I began conversations with the School Board about my retirement.”

“I have been blessed with an amazing career over the past 37 years as an educator….a vocation like none other! I have been blessed because I have had the opportunity to work with people like you. I love this District and every single member of the D230 family. Nevertheless, I know it is time to move on,” he said.

“I am grateful to be part of the District 230 story for the past two decades,” he said. “In that time, many amazing educators, students, families, and community members have shaped District 230 into the incredible school district that it is today. I am grateful to call you my colleagues and friends. And, I am confident that those who write the next chapters will provide the innovative education our students deserve and our community expects.”

“For now, we need to roll up our sleeves and get to work for the students entrusted into our care today,” he concluded. “They have four short years in high school. And, we have a responsibility to prepare them for their future, no matter what path they choose.”

At the August 27 School Board meeting, the District 230 School Board will discuss the next steps regarding the search for the next Superintendent.

“With Dr. Gay’s leadership, our schools have made a lasting impact on our students, community, state, and world,” said School Board President Tony Serratore. “His genuine care and concern for every student, teacher, and staff member is the hallmark of his career. While we will be sad to see him retire at the end of the school year, we are grateful for his unwavering commitment to the district and wish him all the best in the next chapter of his life.”