When playing in a hostile environment – with pre-game jeers by Hinsdale Central students that would make their grandmothers blush – it’s important for a team to prepare mentally.

That’s why Lyons Township senior Grant Niego, who’s played there before, reminded his teammates to “play with a lot of poise and don’t try to do too much right away.

The Lions trailed after the first, second and third quarters, but pulled away in the fourth for a 52-44 victory Friday night. 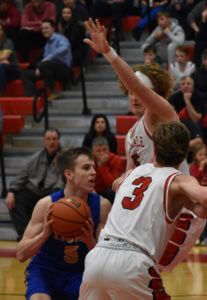 “Their whole game plan is getting Ryan Isaacson the ball. We knew if we pressured the guards, we’d make some steals, get easy layups or they’d turn the ball over,” Niego said.

Senior Anthony Georgelos guarded Isaacson in the second half and held him to just four points on free throws.

“Tony is a defensive end on the football team, very tough and physical, and was able to fight through screens, stay in front of (Isaacson) and make the shots he had tough shots,” Lyons Head Coach Tom Sloan said.

Hinsdale Central came in with a 3-4 record, but Sloan knew a battle awaited: “In an atmosphere like this, it doesn’t matter what the records are. It’s going to be a dogfight.”

With Niego scoring 12 points and Michael Niedermeyer adding six in the first half, Lyons trimmed a 15-7 deficit to 29-25 at halftime.

Hinsdale Central still led 38-35 heading into the fourth quarter. That’s when Lyons senior Michael Shay made a key play to ignite his team.

Shay blocked a shot by 6-foot-5 center Mac Quast and Lyons gained possession. Niego charged down the court and dished off to a wide-open Shay for an easy layup to cut the deficit to 38-37.

“That’s a big swing,” Sloan said “Michael had a lot of important plays for us on both ends of the floor.”

After Hinsdale Central failed to score, Niego did. He then stole the ball and scored again for 41-38 lead. Lyons never trailed afterwards.

Senior Ben Engels iced the win after his layup and foul shot gave Lyons a 48-42 lead with 58.9 seconds left.

Hinsdale Central didn’t help itself by missing eight of 14 free throws in the second half, and going scoreless on five straight possessions.

“It was a lot of little things,” Head Coach Nick Latorre said. “We didn’t handle the ball as well as we should have, had some looks that didn’t go, had some breakdowns defensively.”

Latorre said he “never felt that way” when asked if Hinsdale Central was in control early on.

“We had some good looks,” Latorre said, “(but) didn’t get the ball maybe to Ryan enough in the second half.”