Rookie center Cody Glass scored his second overtime winner of the playoffs to lift the Chicago Wolves to a 5-4 victory over the San Diego Gulls in Game 1 of the Western Conference Finals on Friday night at Allstate Arena.
Glass’ winner came moments after he had his stick slashed out of his hands near the San Diego blue line and raced to the Wolves bench for a new stick from equipment manager Ryan Shoufer.
“I was seeing (the play) developing for (the Gulls) because of Cody having to come to the bench,” said Wolves head coach Rocky Thompson. “So there was an odd-man situation and that’s why their (defensemen) were activated. They were trying to take advantage of that situation.” 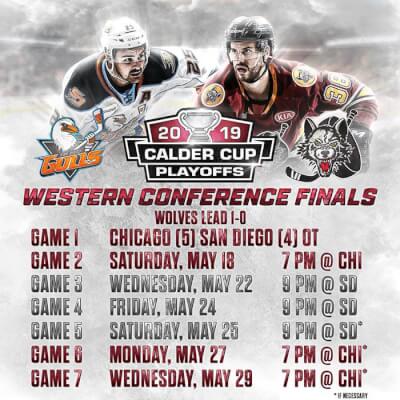 But when Wolves forward Tomas Hyka intercepted a pass and sent a stretch pass up the center of the ice, the delay allowed Glass to sneak behind the Gulls defense for a breakaway on goaltender Jeff Glass. Cody sent the puck under Jeff’s pad at the 14:03 mark of the extra session for his fifth goal of the postseason and third GWG.
“I was second-guessing myself whether I should play defense without a stick or go to the bench,” said Cody Glass. “I heard the boys yelling and Ryan threw me a stick right away and luckily ‘Hyks’ found me going for a breakaway.”
Forwards Tobias Lindberg, Daniel Carr and Tye McGinn and rookie defenseman Nic Hague also scored for Chicago (8-4) while goaltender Oscar Dansk (7-3) stopped 40 of the 44 shots he saw to give the Wolves a 1-0 lead in the best-of-seven series.
Maxime Comtois scored twice while Corey Tropp and Andy Welinski also scored goals for San Diego (7-4). Jeff Glass (6-4) recorded 23 saves.
The Wolves struck first blood at the 6:10 mark of the first period, capitalizing on a worn-out San Diego line after the Wolves held the puck in the offensive zone. Defenseman Zach Whitecloud rifled a one-timer from the right point and Lindberg redirected past Glass to give the Wolves a 1-0 lead.
Tropp evened the score in the final minute of the first period, rushing in on the left side and putting a shot over Dansk’s glove at 19:32.
Carr put the Wolves back up with his power-play goal at 10:05, just nine seconds into the man-advantage. Whitecloud held the zone off the faceoff and got the puck to forward T.J. Tynan along the near boards. Tynan slotted the puck down to Carr near the crease, where he turned and popped the puck over Jeff Glass’s blocker for his third goal in as many games.
The Gulls again rebounded late in the period to tie it when Comtois scored at the 18:51 point of the second period.
McGinn put the Wolves back up 5:50 into the third after Cody Glass entered the Gulls zone before cutting to the right and sending a pass back against the grain to McGinn on the left side. McGinn skated in and banked the puck off Jeff Glass’s blocker and in.
The Gulls took a lead with a pair of goals, one a power-play tally for Welinski at 8:18 and a bounce off the end boards the came right to Comtois at the back door for his second of the night at 10:43. Hague sent the game to overtime with his tally at 16:55. Hague snuck from the point down to the slot unmarked and one-timed a pass from Tynan under Jeff Glass to make it a 4-4 game.
The Wolves host Game 2 at 7 p.m. Saturday as the first 1,000 fans receive Wolves rally towels courtesy of Circle K. For the best ticket deals, visit ChicagoWolves.com or call 1-800-THE-WOLVES.