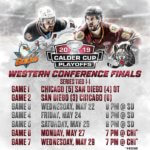 The Chicago Wolves suffered a 3-0 loss to the San Diego Gulls in Game 2 of the Western Conference Finals on Saturday night at Allstate Arena.
Gulls goaltender Kevin Boyle (2-0) stopped all 29 shots he saw to even he best-of-seven series at 1-1. Wolves goaltender Oscar Dansk (7-4) posted 20 saves.
Though the Wolves’ result was the opposite of Game 1’s thrilling overtime win Friday night, head coach Rocky Thompson preferred the way his team played Saturday.
“I liked how we played tonight,” Thompson said. “I thought we had a lot of possession, a lot of opportunity that way. We had our moments for sure, which was encouraging for me. This is the way we’ve got to play. We had the puck a lot tonight, which is good. We were executing a game plan that will give us a chance to have success.” 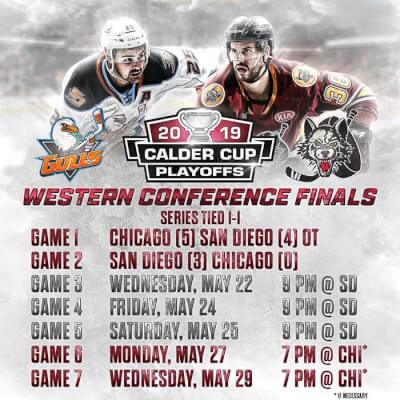 Chicago (8-5) had a 29-23 advantage in shots on net, but Sam Carrick, Jack Kopacka and Sam Steel scored for San Diego (8-4).
Carrick opened the scoring 6:56 into the first period, capitalizing on a rebound to the left of Dansk’s crease. Kopacka gave the Gulls a 2-0 advantage at the 2:08 mark of the second period when he captured a blocked shot and sent it past Dansk through traffic.
Steel put the game away at the 18:42 point of the third period, scoring on the empty net to seal the 3-0 victory.
The best-of-seven series shifts to San Diego as the Gulls host Game 3 at 9 p.m. Wednesday. If necessary, the series returns to Chicago for Game 6 on Monday, May 27, and Game 7 on Wednesday, May 29. For the best ticket deals, visit ChicagoWolves.com or call 1-800-THE-WOLVES.

Pappas displays Christmas trees from around the world Editors Pick