No slowing down for Cummings

Mayor Noel B. Cummings enjoyed a hearty laugh in his office at the Hodgkins Village Hall when asked if he is surprised nobody challenged him in the upcoming election.

“Not really,” he said. “I’ve got a good record and everybody is on our team.”

That record stretches back 40 years as mayor, 44 if you add his one term as a trustee.

Cummings is running unopposed and on April 2ndwill win his 11thfour-year term as mayor. According to Wikipedia, he is the longest-serving current mayor in Illinois.

Oh, and celebrated his 91stbirthday in October.

At an age where few are working, let alone running a thriving community, he can be found in his first-floor office, working as mayor.

“I enjoy it. I enjoy being where I can help people. The residents of the village of Hodgkins, I like to help everyone. And all of our businesses, too,” he said Feb.27. 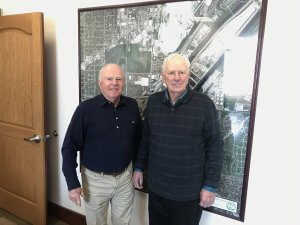 Noel B. Cummings, right, is 91 years young, and has been mayor of Hodgkins the past 40 years. He will win on April 2, as no one opposes him. Village Attorney John O’Connell has been his right-hand man through the years. Photo by Steve Metsch.

Cummings leans on lessons learned growing up on a farm in Mississippi, “where nobody put locks on the doors and everybody trusted each other. What a great community it was. What a wonderful life I had living there.”

It was there his father told him the best way to defeat an enemy was to make him your friend. “That’s what I’ve tried to do,” he said.

After winning his first mayoral election, he brought in the opposition and told them if they were serious about improving Hodgkins, they should serve on a planning committee.

“We were one of the poorest little towns in Illinois. People asked me why I wanted to be mayor. I told them it won’t be that way when we get through with it,” Cummings said with a smile.

A former motor freight terminal that stretched from East Avenue to La Grange Road, on the south side of Joliet Road, is now home to the Quarry Shopping Center that boasts a Target, Kohl’s, Walmart and Sam’s Club.

There’s a gun range in town, and a movie theater complex.

Don’t forget the sprawling industrial park south of 67thStreet, home to dozens of companies. You can see it from the Tri-State Tollway. And then there’s the UPS facility.

“We have the largest package sorting plant in the world. The UPS plant. In the world. I like to brag about that every time I get the chance,” he said.

It’s all a testament to Cummings’ vision that, at age 91, is clear as ever.

“We’re not done yet,” he says. “We still have some empty spaces.”

He hopes to bring retail to a seven-acre site on Lenzi Avenue where an apartment complex had stood.

“We’ve started a beautification program downtown where we find an old house, something up for sale, or goes into foreclosure. We’ve purchased the property, will tear it down and sell it to developers for $60,000 per parcel with the understanding they will build a new home,” O’Connell said.

There are six new such houses in Hodgkins.

Cummings’ right-hand man through the years has been O’Connell, a former state representative. When they met, Cummings took it as a good omen as O’Connell shared a first name with the mayor’s older brother.

“He was the best brother you could have. I told my wife I wish I could find someone like him, and I found him,” Cummings said.

“His hearing isn’t good and (that) drives me nuts. But I’ve got used to talking loudly. I’d rather have his hearing bad than his mind.”

Cummings is sharp as a tack. His eyes are bright. His handshake is strong.

He’d love to see elected leaders in Washington, D.C., adopt his policy of working together. “A house divided against itself can’t stand,” he said, borrowing from Abe Lincoln.

“That’s what’s going to happen to our country if it keeps going this way. How sad it is. Instead of trying to help each other, they try to knock each other.

“We’re all in the same boat, Democrats on one side, Republicans on the other. And we’re shooting at each other. When you sink the boat, everybody goes down, not just one side,” he warned.

For now, Cummings’ focus – as it has been the past four decades – is on making Hodgkins the best it can be.