An Extended Veterans week comes to an end Sunday and Monday

What started about two years ago has flourished into a 10 day celebration honoring Veterans. During an unofficial meeting with several City of Chicago, Cook County and State of Illinois Veterans, the participants noted the many excellent Veterans Day programs jammed into a weekend or during the week. Starting October 27th and leading to November 12th, there have been more than 50 events honoring American Veterans, and a few events celebrating those who fought along with the American Military.

Do you know what is the oldest, the best, and most viable social network in the world? See the end of today’s column.

The Jesse Brown VA Medical Center  will celebrate Veterans Day on Sunday, November 11, from 11 AM to 1 PM in the Kizer Conference Center  at 820 South Damen. The celebration will honor the Jesse Brown Veterans Food Pantry which has won several national awards for operations and extended services under the direction of Patrick Gleason. Connie’s Pizza will provide a light lunch and “In Full Swing” will provide music for listening and dancing.

Mark Brown, Chicago Sun-Times columnist, won the Dorothy Storck award for his series on the homeless in Chicago and Cook County area.  The award was from the Chicago Journalists Association.  Brown’s series of stories covered all segments of the homeless population from Veterans to underage children. Dorothy Storck was an Air Force Veteran and Pulitzer Prize winner whose award was established by her fiancé Dr. Dick Simpson, professor of political science at the University of Illinois Chicago.  The award event was attended by several Chicago area journalists groups. Attending were The Chicago Press Vets, now called Chicago Association of Journalists (CAJ), and the host for the event Maudlyne Ihejirika, current president of CAJ, Allen Rafalson, past president of CAJ for almost a decade and Dr. Jerry Field, president emeritus of the International Press Club (IPC) of Chicago.

Saturday, November 10th, the National Desert Storm Memorial will host a benefit event at the Chicago Wolves Hockey game vs the Rockford Ice Hogs at 7 PM. at the Allstate Arena. A ticket are $25, and includes parking, and a winter hat, with all proceeds earmarked for the National Desert Storm Memorial. For ticket information, e mail slfixler@hotmail.com or call 630-589-6024. 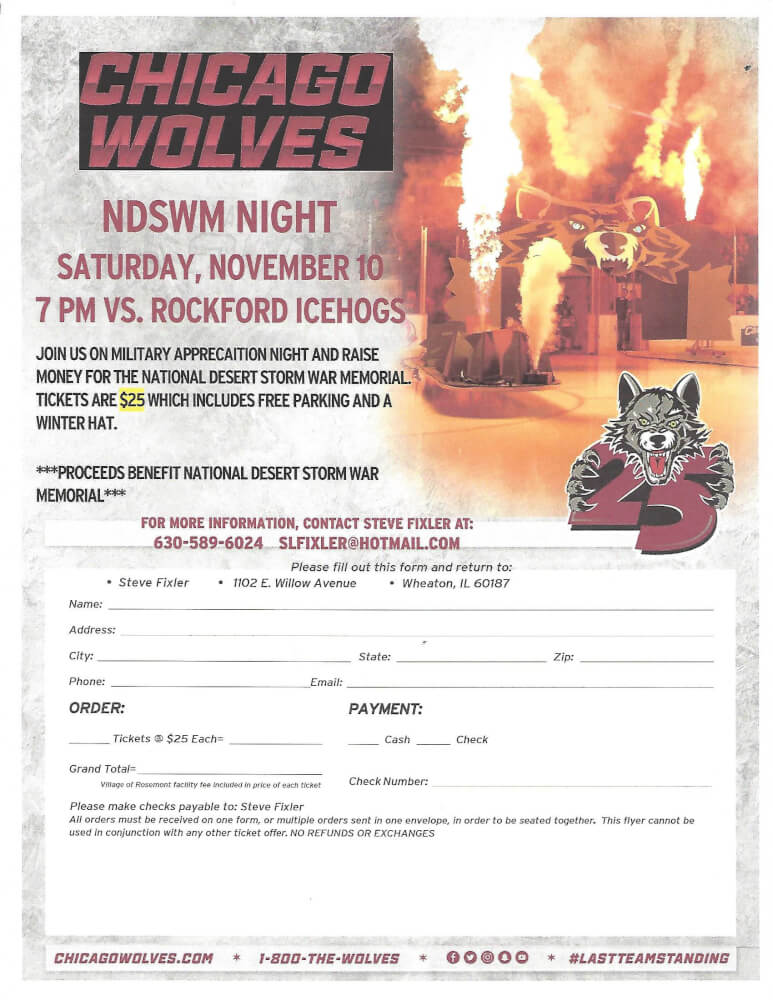 VA now offers a Decision Ready Claims (DRC) program which is the fastest way to process a claim.

If you are submitting a claim for increased disability compensation or filing for the first time, follow the suggested four steps:

The VSO has filed hundreds of claims. It is a time consuming effort that requires all the paper work in the right order and all the forms properly filled out. Having a VSO who has the experience is a great benefit. It’s another service of the VA.

This November (2018) issue of the American Legion Magazine lists the 5 Veterans Memorials to visit.

The museum is a display of more than 2500 Veterans art work, combat displays, poetry and music.

Thursday, November 19, 6 pm James Holland, historian, and broadcaster discusses his book, “The Biggest Air Battle of World War Two.” Previous Holland books are “The Rise of Germany 1939-1941” and the “Allies Strike Back 1941-1943.”

Most events at Pritzker Military Library are free to members. For Veterans discounts, contact the library.

The answer to questions at the top of the column: What is the oldest, the best, and most viable social network in the world? Answer: “When two veterans say hello”.

A Comment on Past and Present Veteran Behavior Chicago