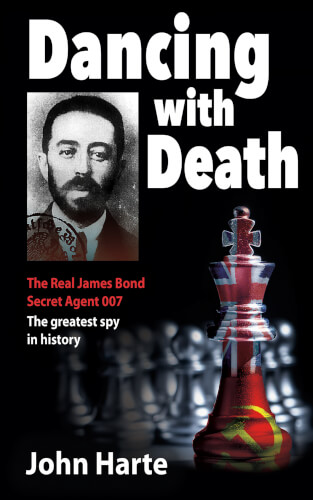 New book “Dancing with Death” and James Bond “getting his girl”

It was encouraging to hear that No Time to Die – the most recent James Bond 007 movie extravaganza – broke all previous box office records after being postponed several times when the Covid viral epidemic closed thousands of cinemas. The aim of the successful Bond movie franchise is apparently to draw $100 million into cinema box offices. They are on their way with $6,3 million in hand from the premiers alone – which is hailed as a record.

Léa Seydoux is the latest so-called “Bond Girl.” She is not the typical glamour girl of past Bond movies. The franchise decided it was time to mature in their view of shallow glamour girls, and treat women more seriously on the screen. But where did the tradition of James Bond the super-spy always getting his girl as well as the villain, originate, since it has always been a “must” from the very first Bond film?

Dagmara the Russian dancer was just one of the young woman in his Moscow safe-house in the 1917 Revolution, who were happy to share his bed. Caryll, the English artist and poet wrote of her love for him in London as if he were a god, Pepita the South American chorus girl, laid her plans to seduce him when he was being applauded for his espionage exploits in postwar Germany in 1919. Gemma was a pseudonym for the woman he had always loved since he was 19; she was really his cousin Felicia.

His first known lover was the most famous Irish novelist at the time, Ethel Voynich. But it was the red-headed and red-blooded Margaret whom he married first. None of them was a famous “Bond Girl” in one of the Bond films, although all of them might have been, since they were the mistresses of the shadowy but real-life secret agent whose top-secret file novelist Ian Fleming discovered when he was in the Royal Navy in World Wa 2. And, eureka! Fleming conceived how to turn the real-life Reilly into a more contemporary fictional hero whom he named James Bond 007.

All that, and more, is revealed in John Harte’s new nonfiction book called Dancing with Death: Deceptions of the Greatest Secret Agent in History – the Model for James Bond 007. Although postponed by the virus epidemic, like the latest Bond movie, It is now published by Cune Press of Seattle, USA, and distributed worldwide by PGW.

The release of the new James Bond 007 movie, No Time to Die, came as a welcome relief to most cinema audiences suffering from the stress of two years of lockdown from the Covid virus. After its record-breaking premieres at the beginning of October, it seems to be on its way to new box office records all over the world, demonstrating that audiences are hungry for entertainment. It raises the question whether the art of the cinema should be aimed at “elevating the spirit to a higher plane?” Or is it just to provide a bit of fun for lighthearted audiences who want to escape into a fantasy world of wishful thinking by identifying with a swashbuckling celluloid hero?

The James Bond 007 movie extravaganzas share a vital ingredient with the enormous annual successes of the “Last Night of the BBC Proms” at London’s Albert Hall. Both discovered ways for massive audiences to identify with their performances. Apart from their shared quintessential “Englishness” (whatever that is) both owe their success to heroes. The Proms owe a debt to Sir Henry Wood, who founded them in 1895. Lesser known to audiences and readers of James Bond novels, were the critical dramas taking place outside the Albert Hall at that time, which marked the decline of the Victorian Era in Britain.

When Britain began to fall apart in 1895, as a consequence of the collapse of four great empires, and subversions from their secret police and from traitors in England, it needed a real hero to penetrate the bomb-throwing forerunners of IRA terrorists, from anarchists, communists, and the “Jubilee Plot” to assassinate Queen Victoria. Like Churchill, who emerged to save Britain from Nazi slavery in 1940, a young man applied to Britain’s new Secret Intelligence Bureau in London, and was enrolled as a secret agent, code-numbered ST1. He penetrated terrorist organizations using an Irish cover-name.

His audacity and bravery were recognized in the 1917 Bolshevik Revolution, He achieved success for Britain in Manchuria, Russia and Germany, to become Churchill’s favorite spy. They worked to replace Lenin with Savinkov, whom Churchill and his super-spy championed as Russia’s new leader. Here was the real secret agent whom novelist Ian Fleming was inspired to recreate as the fictional 007; as he admitted when his first Bond novel was published.

All that, and much more about the real so-called “Ace of Spies,” who was a real-life Bond, can be found in John Harte’s new nonfiction book called Dancing with Death: Deceptions of the Greatest Secret Agent in History – the model for James Bond 007. Now published by Cune Press of Seattle, USA, it is distributed worldwide by PGW.

Now that the James Bond 007 film franchise has successfully launched the 25th explosive Bond movie in the United States, called No Time to Die, about the iconic and adventurous secret agent who has become a household name all over the world, perhaps it is time to consider how it all began and whether there was a significant reason for the fictional character of this chauvinistic superman to appear. For example, the cartoon character of “Superman” first appeared in Action Comics on April 18, 1938, at a time when Americans first began to realise the menace to the free world of Hitler and Nazi Germany. Hitler claimed that Germans were a new race of Supermen; and here was a fictional hero from another planet, named Superman, who was about to combat this new Dark Domain.

Ian Fleming wrote his first James Bond novel in 1952, when Marshall Stalin was dying, but the Soviet Union still posed a threat to the free world. Although citizens in East Berlin attempted to rise against communist rule, they were easily beaten back by Russian tanks. But, in reality, Fleming had been a Naval Intelligence officer in World War 2 when he discovered the top-secret Admiralty file of the most successful British secret agent in history. That was eight years earlier. The undercover code name for the real “Ace of Spies” was not 007, but ST1. As Fleming read of his true exploits with amazement and awe, the idea came to him to write his first novel about someone like this super-spy. James Bond’s major protagonist was usually Soviet Russia.

It was “M” who headed Britain’s Secret Intelligence Bureau (SIB) who recognized the winning qualities of this new candidate who would become the “Ace of Spies.” He gave him an Irish cover-name to penetrate the bomb-throwing Fenian Brotherhood, who were the forerunners of the IRA militant terrorist group. Author John Harte first became interested in political extremism and terrorist organizations when, as an investigative journalist, he discovered a plot in 1948 to overthrown Britain’s Government by the British Union of Fascists.  He compiled a dossier on all the Fascist splinter groups, and had it presented to Parliament through the leader writer of the Sunday Pictorial tabloid newspaper. The media exposure ended Mosley’s political career.

John Harte describes the so-called “Ace of Spies” on whom Bond was modeled, in his new book called Dancing with Death, published by Cune Press of Seattle, and distributed worldwide by PGW.

“No Time to Die is a James Bond film unlike any other,” according to CTV News when reviewing the 25th James Bond 007 film extravaganzas that just opened in October. What did they mean? Certainly, the fact that its leading man Daniel Craig will makes his last appearance as the iconic super-spy James Bond makes it unique. But, in fact, what they referred to was the latest so-called “Bond Girl” named Dr Madeleine Swann.

Bond’s film lovers have always had to be special, whether petite or statuesque, and very different from each other – and not always trustworthy, because Bond is likely to be more vulnerable to the blade of a knife, a hypodermic needle, or a bullet, while naked in bed. That is where novelist Ian Fleming’s fictional British secret agent differs from the real-life British spy who gave him the idea for inventing 007. The real undercover agent was coded ST1. He was as cool and calculating as the fictional James Bond, and could trust all his women friends to the very end. It is significant that none of them ever betrayed him, even when threatened with torture or death.

There was Dagmara the Russian dancer, Caryll the English artist and poet, Pepita the South American chorus girl whom he would marry bigamously; Gemma, the cover-name for the woman he always loved, who was his cousin Felicia. His first known lover was the best-selling Irish novelist Ethel Voynich. But it was the red-headed Margaret whom he married first. You would be right to look puzzled, since none of them was a famous “Bond Girl” featured in one of the Bond films. All of them were the mistresses of the shadowy but real-life secret agent whose top-secret file novelist Ian Fleming discovered when he was in the Royal Navy in World War 2.

The media have made a number of guesses about who was the original model for 007, and always been wrong, because so little was known about the real swashbuckling hero of Britain’s Secret Intelligence Service (SIS), or still kept top-secret. Now John Harte’s nonfiction account of the once-famous “Ace of Spies” tells all. His new book is called Dancing with Death: Deceptions of the Greatest Secret Agent in History – the Model for James Bond 007. Its publication was delayed because of the Covid virus epidemic. Now it is published by Cune Press of Seattle U.S.A. and distributed worldwide by PGW. Want more information about author and book?  Log on to http://www.johnhartebooks.com

Rehearsals are Underway for Steppenwolf’s World Premiere of Lindiwe Entertainment