When a team scores five runs in one inning without getting the softball out of the infield, it does not bode well for the opponent.

Such was the case when Hinsdale Central scored five times in the top of the fifth inning to break open a 3-3 tie at Lyons Township.

“That was tough,” Lyons Head Coach Nikki Paluch said. “They found small, little holes that we have a hard time defending.”

A double, error and walk filled the bases for the Red Devils. That was followed by two errors, two ill-advised throws home and a ground out.

Making the loss more frustrating for Lyons was that starting pitcher Lily Hanafin did what she was asked.

“Lily pitched great,” Paluch said of the junior. “She’s got a great drop ball and that produces ground balls, but we’ve never seen them just die like that.” 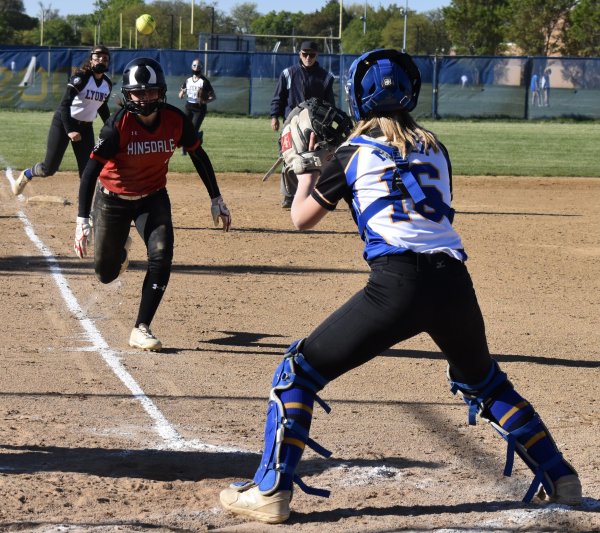 Hanafin – who fanned five and allowed five hits in 4 and 2/3rd innings – said it was a tough game to get through.

“It wasn’t a lights-out day, when I strike everybody out, so it’s important to have the team behind you,” Hanafin said.

“(Brosius) moved the ball in and out on us,” Paluch said. “Kudos to her. She got a lot of big outs. We left a lot of runners on base. Whatever she was throwing was keeping us off balance and getting the job done for them.”

Lyons grabbed an early lead with two runs in the bottom of the first. After Emily Joseph scored on a passed ball, Tess Meyer scored on Anna Bryant’s single. 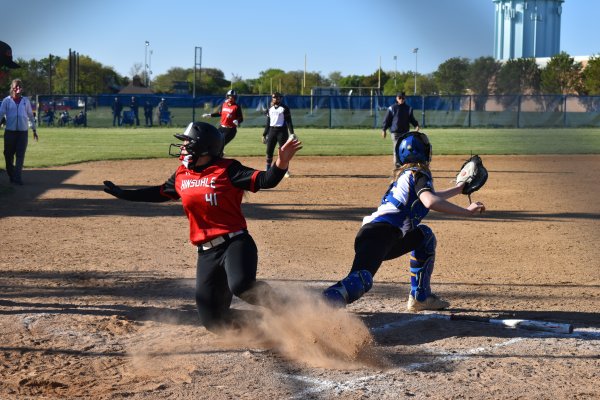 Hinsdale Central’s Lainey Harvey calls herself safe – and she was – during the Red Devils’ 8-5 win at Lyons Township on Wednesday, May 12. Photo by Steve Metsch.

“That’s one of the best things about Sarah,” Zust said. “She doesn’t let things bother her. We’ve been working with her to build up her confidence.”

“What a way to start,” Zust said. “She’s getting the game ball today. She’s a gamer.”

Hinsdale Central scored three runs in the top of the third, two by a bloop single to center off the bat of Reese Racila.

But Lyons tied the score 3-3 in the third. Bryant, who was 3-for-4, doubled home Hanafin, who belted three doubles in four at-bats.

“She’s a great hitter,” Paluch said of Hanafin. “She was on varsity as a freshman. I have all the confidence in the world when she’s up there at the plate.”

Meyer, a sophomore catcher also played well for Lyons, nearly picking a runner off at third base.

“She’s very mature back there,” Paluch said. “She’s got a great arm and great smarts behind the plate.”

Lyons did make things interesting late, scoring two runs in the seventh and threatening to tie the game.

The bases were loaded with two out and leadoff batter Joseph batting, However, she grounded sharply to third base to end the game.

Lyons lefty Ava Kostecki was terrific in relief, fanning six of the eight batters she faced. The pitching of Kostecki and Hanafin give Meyer and Paluch hope for the postseason.

“I think we’ve got the pitching,” Meyer said. “Today was just an off day. We’ve just got to shake it off.”

“We have a few things we know to work on before we get into the postseason,” Paluch said. “We’re going to take all of the bad outcomes from this game and use them to make us better.”