According to unofficial totals from the Cook County Clerk’s office, Getty beat his challenger by more than 1,000 votes.

“We came to this victory through a different process, a process that existed 50 years ago and was commonplace in elections,” Getty told a cheering crowd of about 100 at J.C.’s Pub in McCook around 10 p.m. Tuesday. 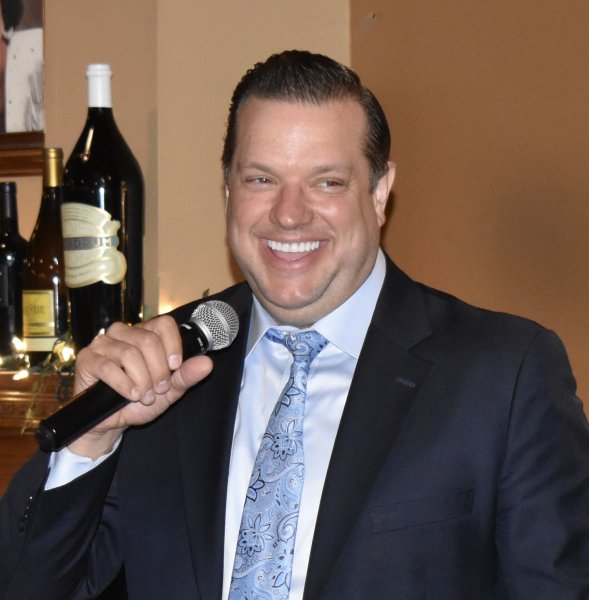 Because of pandemic-related concerns about leaving one’s home to perhaps attend a political rally, Getty’s crew instead took the campaign to the voters.

“We started in the second week of January, knocking on doors,” Getty said. “We wore our masks. We made sure our message was communicated by face-to-face contact and handing people literature.”

“Now why do people not knock on doors, engage face-to-face one voter at a time? Because it’s the hardest way to run an election,” Getty said.

That hard work paid off for Getty and his United Citizens Party running mates.

A grateful Getty introduced 29 volunteers who worked the eight precincts.

“Each one of them dedicated themselves to make sure we got re-elected,” said Getty, who also thanked his wife, brother, and parents.

Getty noted that letter carrier James Koch got the vote out in a big way in the precinct on the east side of town between the Des Plaines River and Harlem Avenue.

After delivering the mail, Koch returned later to knock on doors with his daughter, and tavern owner Eddie Wilkowski.

“They delivered the vote,” Getty said.

In the contested mayoral election of 2013, there were 14 votes cast in that precinct which has about 70 registered voters, Getty said.

Getty called it “by margin, one of the biggest upsets of the night.”

“A beautiful night,” Koch said later. ““I’ve never (before) seen a mayor who walks out of his car, picks up garbage off the street, who cares about the residents.” 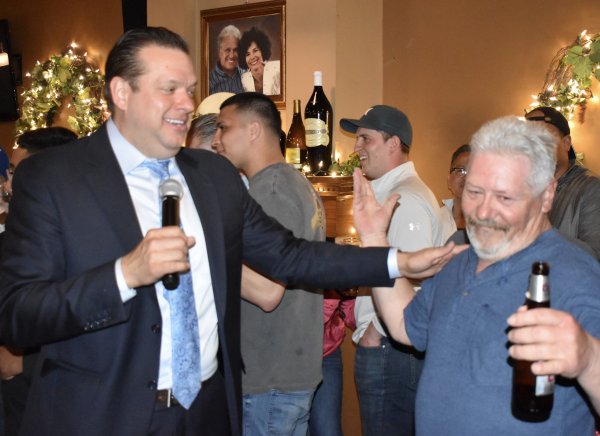 Getty recalled how Grace showed up offering to help him win public office after Getty had lost a trustee campaign in 2007. Getty had also lost in 2005.

“I said, ‘Do you not realize we lost the election? We’ve got nothing going here.’ For the next two years, he worked alongside us, the founders of this organization. He helped us achieve success in 2009. That’s Ryan Grace who shows up when we lost and works his butt off,” Getty said.

Perhaps Grace was the missing link? Since then, Getty Is undefeated, winning mayoral elections in 2009, 2013, 2017 and this year.

“We’ve had 12 years of successful elections, 12 years of investment in the village of Lyons,” Getty beamed. “I guarantee you tonight, we have four more years.”

As the crowd celebrated after his speech, Getty had a big smile as he posed for photos with supporters.

“That’s all it came down to, outworking the competition, communicating to the voters face to face, and making sure we win their support,” Getty said.

Around 10:45 p.m. in the parking lot – ready to light a victory cigar he had hoped to fire up for Donald Trump in November – Marchiori agreed that the diverse team of supporters was the key.

“We pick the people with the best character we can find,” Marchiori said. “A lot of our guys started very young.”

Marchiori fondly recalled meeting Getty, then 26, during the latter’s first successful campaign for mayor in 2009.

“I believed in him and look what happened,” Marchiori, 63, said. “I saw a young man who was dedicated to the town he grew up in, and wanted to change it for the better and we all believed in him.”

Gatz was not home when a reporter seeking comment visited at 11 p.m. He was out removing his party’s campaign signs, his wife said.

On his web site, Gatz had written that he and his running mates “are committed to transparency, honesty, open communication and to work for the residents.”

Ironically, 20 years ago, Getty was a campaign worker knocking on doors for Gatz. He was 18 years old when he helped Gatz win election a village trustee in 2001.

“We had little interaction with each other during this campaign cycle,” Getty said. “I respect him as a resident.”