Residents living in the southwest corner of Lyons found an early Christmas gift in their alleys the week of Dec. 11: Bright blue 65-gallon recycling bins.

The new bins replace the old, smaller versions that had no lids. These are designed to hold all the items that are recyclable, and are placed out with the garbage cans on collection day.

Suchy would assemble the axle and wheels at the bottom and then he and Karasek would roll the bins to their new homes.

The old, 35-gallon bins had no lids and “crack very easily when it’s winter and it’s cold out,” Mayor Christopher Getty told village trustees at a finance committee meeting before their Dec. 5 village board meeting. 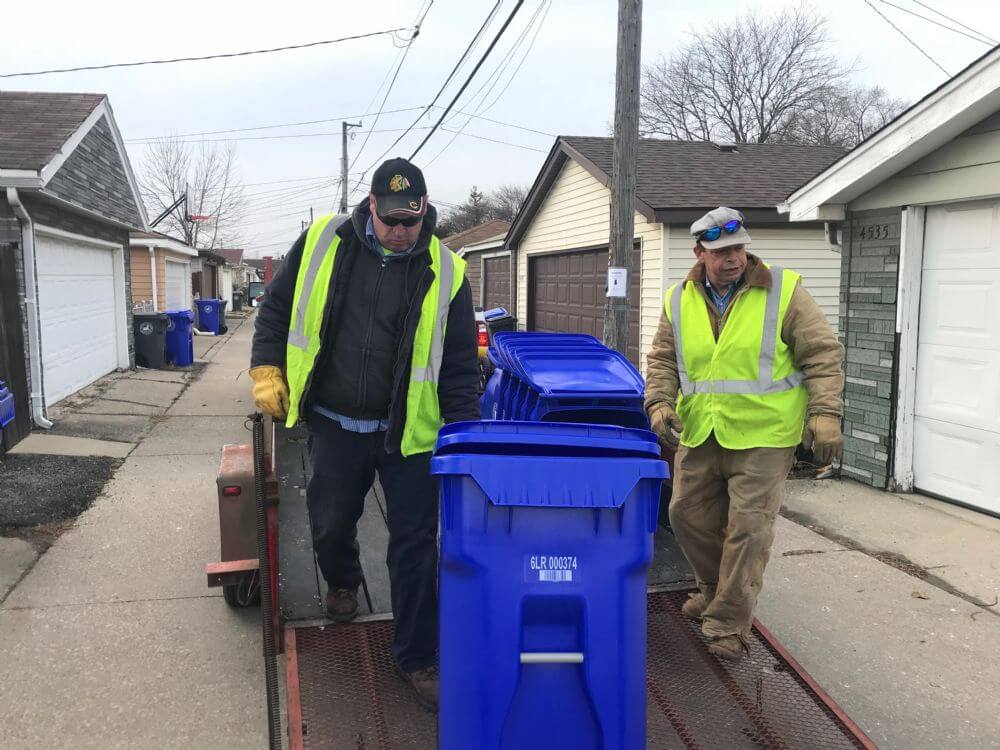 “They blow in the wind very easily. When they do, they crack, get lost, or someone else picks them up. For some time now, we’ve talked about going to a toter. This is almost twice the amount of capacity. It doesn’t blow around in the wind. And, it doesn’t break in the winter,” Getty said.

“We believe that over the long run, this will be cost savings. This is a process we’ll do slowly, over the next two years,” he said.

“I recycle like crazy. It’s amazing the amount of recyclables I collect in my house. It’s like three bags of recyclable items to every one bag of garbage. And I live by myself,” Ramirez said.

“All the smaller, round recycling cans will be reclaimed at the public works garage. We came to the point where we did not have a single can left. These, they’re about $20,000 for 450, so they’re expensive,” Getty said.

That’s why the village will slowly phase them in.

The public works department has also renegotiated the price paid to the recycling company, with great benefit for Lyons.

“We previously were paying about $15 a ton to dump (recyclables) there. We were able to negotiate that to zero because we were bringing in what they call ‘quality recycling.’ That’s been going on for the last month and a half,” Getty said.

The toters have a bar that attach to the hydraulic lift on the recycling truck, meaning the employees won’t risk injury by lifting the heavy toters.

Village Trustee Dan Hilker urged residents to keep their toters cleaned out, perhaps rinsing them out with a hose now and then.

The next round of new toters will be delivered in perhaps six to nine months, Getty said, with the entire village getting the new bins within about two years.

“If you know anybody who wants a 95-gallon toter, you can call the village and get one. We’ve had those for years. That’s a big one. I have one of those,” Getty said.