Argo teachers, board at odds

Five teachers at Argo Community High School shared their dissatisfaction with ongoing contract talks during a recent meeting of the School District 217 board.

The five addressed the board from remote locations via a video screen set up in Room 114 on Oct. 19.

Each shared concern about compensation during what has been a trying time for educators, officials and students thanks to the coronavirus pandemic changing the way high school classes are taught.

In a prepared statement, the school board countered that teachers are being compensated fairly, and at a higher level that teachers working at neighboring schools.

While board members opted to not speak individually on the contract negotiations, Board President Dan Kozal, read the statement in which the board said the current contract is fair, noting that the average teacher’s salary at Argo is above $110,000. 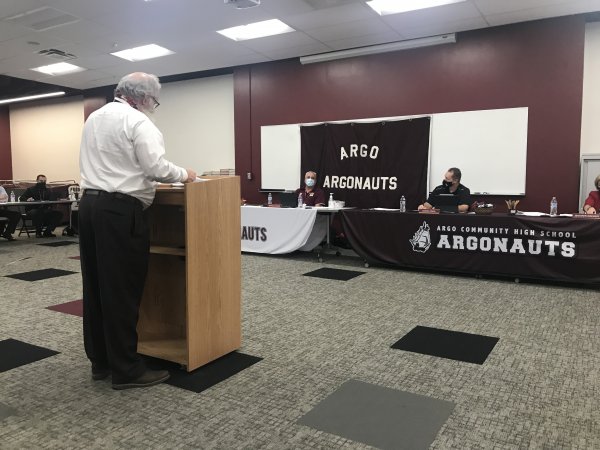 The Argo High School Board and teachers union are having negotiations for a new contract. Photo by Steve Metsch.

Union President Kyle Stern, a math teacher, wrote in an e-mail: “The union is disappointed that the district is violating ground rules we agreed to in bargaining.”

Stern added: “We hope going forward that they will focus their efforts at the bargaining table where we can work together to reach a fair agreement.”

Kurt Taute, in his 25th year teaching math at Argo, said the teacher union has made “a fair offer” in negotiations.

Asked about that offer, Stern wrote: “The district and union agreed to ground rules for negotiations.  We’d like to continue to follow those ground rules and not bargain in public.”

Science teacher Nick Borowicz said “teachers at Argo care about the kids who come through our doors” and “work tirelessly in the ever-changing conditions to offer them the best possible instruction we can,”

“We bust our tails,” Borowicz said, “We deserve solid compensation for what we do. We earn it.”

Reading from the statement, Kozal indicated the board knows teachers do work hard.

“We recognize the effort of our teaching staff and are proud accomplishments they have contributed to Argo Community High School, including being named one of US News Top High Schools in America,” Kozal read.

Earlier this year, Argo was named a U.S. News Best High School Silver Medalist, an honor made more impressive by what’s happened since with the pandemic.

Science Department Chair Jill Alexander, who has taught at Argo since 1993, said she’s “seen a lot of crazy things, but nothing like the past seven months with the COVID pandemic.”

Argo teaches have “often gone above and beyond” in the pandemic, Alexander said.

“We have rewritten curricula to make it more conducive to remote and hybrid learning,” Alexander said. “Many teachers had to learn new technology just to teach their classes this year.”

Alexander noted that classes, student meetings, and parent conferences are done “all from home while juggling the needs of our families.”

English teachers Aimee Guldin and Mary Jo Brown also addressed the board. Brown asked the board to “think about the emotional strain.”

“Our ongoing negotiations are considering the current economic impact COVID-19 has had on our communities and the future impact that the reduction of federal, state, and local funding will have on our district,” he read.

“It is our responsibility as the elected board members of School District 217 to ensure sensible, reasonable, and equitable compensation for all employees in District 217,” Kozal read.

Kozal said the board’s objectives are to: Maintain education and co-curricular opportunities for District 217 students; demonstrate fairness and equity for the taxpayers; and offer reasonable and highly competitive compensation for educators.

Borowicz said he has grown tired of hearing in each contract negotiations that paying teachers more will bankrupt the school district.

“In 2015, projections again forecast looming bankruptcy if cuts were not made in teachers’ salaries,” Borowicz said. “it’s now five years later and we’re still not bankrupt.”