Village among many sites in Cook County

Lyons Mayor Christopher Getty welcomed local, state and federal officials and candidates to the front steps of the village hall on Oct. 19 to promote early voting in Cook County.

Monday marked the opening of early voting which runs through Nov. 2. Election Day is Nov. 3.

Early voting is open at the Lyons Village Hall and all suburban locations in Cook County from 8:30 a.m.to 7 p.m. Monday through Friday, and 9 a.m. to 5 p.m. Saturday and Sunday, Getty said.

“We’re happy to have such a presence today,” Getty said of those who joined him. 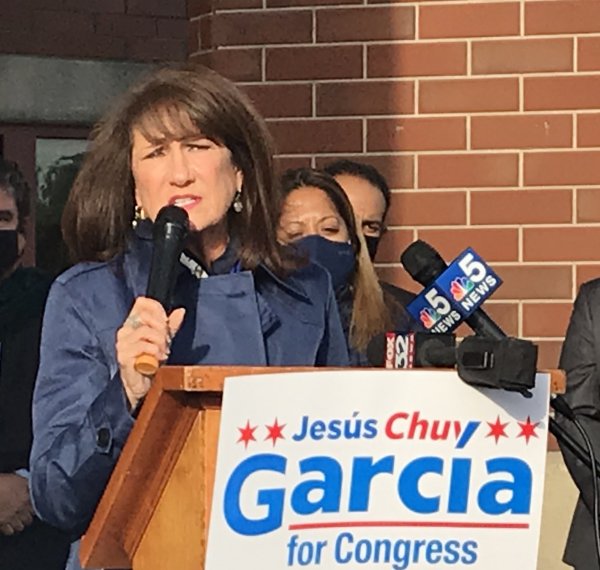 Marie Newman, the Democratic candidate in the 3rd Congressional District, urged people to get out and vote early. Early voting continues through Nov. 2nd. Photo by Steve Metsch.

U.S. Rep Chuy Garcia said “there are no excuses” to not vote.

“People are turning out in record numbers across the country,” Garcia said. “Take advantage of this opportunity. With the pandemic, this is the best way to do it.

“Democracy and our country need you, so get out and take advantage of early voting across suburban Cook County,” Garcia said.

“She will fight to bring back jobs and to train people for the work force,” Garcia said. “She understands jobs are critical to building an economy that works for all, that pays a living wage and provide access for health care for everyone in our country.”

Newman thanked Garcia for his endorsement and said she looks forward to working with him on infrastructure and transportation issues.

“Get out there early and get your vote counted,” Newman said. “Here’s what you’re going to bring to the voting booth, the fact this this pandemic has gone on and on and on.”

Newman ripped President Trump for his response to the virus: “Remember that 220,000 souls have passed. Bring that into the booth with you. Let’s have a better way and vote Democratic up and down the ballot.”

Villanueva thanked those who have voted by mail, and urged those who want to vote early to cast ballots “in a safe manner” at the Lyons Village Hall.

Sepulveda said “I’m proud to be here with diverse women of the suburbs.”

Early voting is also available at the Brookfield, Bridgeview and Hodgings village halls.

You can vote at any site as long as you reside in Cook County. Visit www.cookcountyclerk.com for a complete list of locations.