Lyons School District 103 board member Winifred Rodriguez has taken to task two members of the board’s minority after a private Facebook page they administrate delved into one of her saddest memories.

Rodriguez’ son, Chicago police officer Tito Rodriguez Jr., died in 2015 in a motorcycle accident. He was killed on the Dan Ryan Expressway when his motorcycle was struck by a car.

A June 23 post by Gloria Medina, a parent in the school district, on the SD 103 Residents page touched on that.

She posted, “Yes, these are the monsters who make decisions because they don’t’ care about our children. WiniFred (sic) you had a son do something good in his memory!!”

The mentioning of her late son on the Facebook page infuriated Rodriguez, who sent an email to Supt. Kris Rivera criticizing the administrators of the page, a group that includes current board members Shannon Johnson and Marge Hubacek.

“My son’s death has nothing to do with this and I blame the two board members that are the Admins that left a very disrespectful and rude comment go through,” Rodriguez wrote to Rivera.

Rodriguez added that “it is never appropriate to speak of anyone’s child especially if their child is no longer here.” 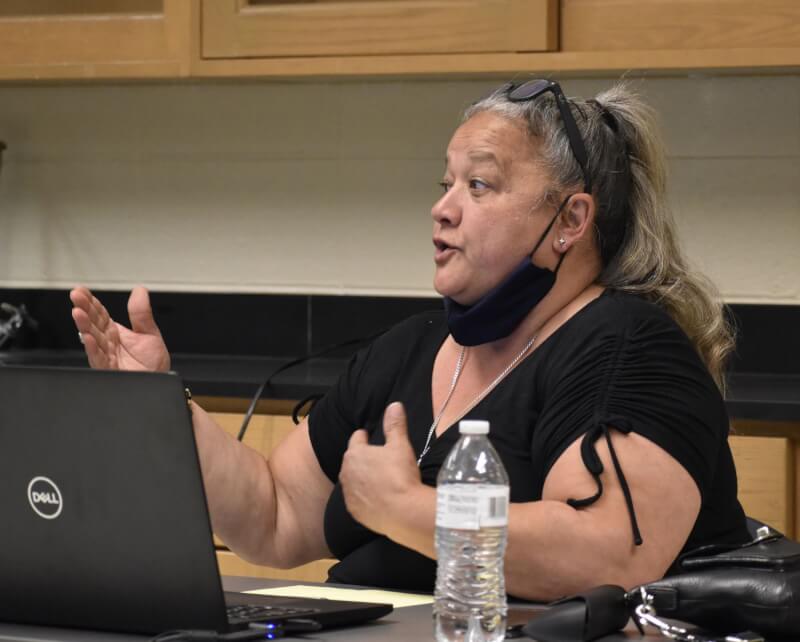 Lyons School District 103 board member Winifred Rodriguez is upset with two fellow board members of their handling of a Facebook page that mentioned her late son. Photo by Steve Metsch.

During the June 30 board meeting, she read into the record a three-page letter ripping Hubacek and Johnson for the page’s “vicious, shameful and personal attacks against me.”

She added, “To allow disgraceful attacks that reference my son, a Chicago policeman dedicated to protecting the lives of families and the public, who lost his life in a motorcycle accident …”

“These comments and attacks are not anonymous on this private Facebook page. They are made by people directly associated with Hubacek and Johnson, including Johnsons’ activist husband, Earl Johnson.”

Contacted at her home on July 1, Rodriguez said the other board members were “blasting me about my son, who they have no idea about.”

Hubacek said she was an administrator on the Facebook page “not because I’m on the board, but because I’m an active member of the community.”

“Should she have put it up? Maybe not,” Hubacek said of Medina. “The point she was saying was do something good for kids. (Rodriguez’) daughter took exception to that and posted it.”

The post “offended my daughter so she put that post on (the) Lyons Living (page) and added her comments … so people could see how ignorant they are,” Rodriguez said.

The post in question had been swiftly removed from the private page, Hubacek said on July 2: “(Medina) didn’t say anything derogatory. She didn’t mean to cause anybody grief.”

“I have nothing to be ashamed of,” Hubacek added.

“It’s not a blog. It’s a Facebook page,” Hubacek said. “It has nothing to do with the board. If she’s got a problem with it, she should talk to her daughter about it … I’m not here to censure people.”

She closed her letter read into the record by saying the two board members had demonstrated “the height of unprofessionalism and disrespect.”