The village of Lyons has canceled its Fourth of July parade, party in the park and fireworks this year because of – you guessed it – the coronavirus pandemic.

“It’s disappointing,” Lyons Mayor Christopher Getty said of the parade being canceled. “It’s something we look forward to every year.” 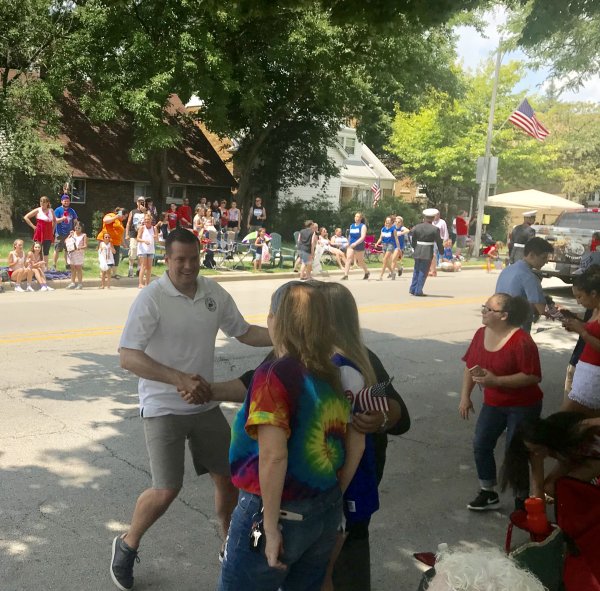 Lyons Mayor Christopher Getty, seen here during the Fourth of July parade in 2018, has been forced to cancel this year’s parade because of the coronavirus pandemic. The party in the park and fireworks are also canceled. Photo by Steve Metsch.

They join the Father’s Day Car Show and the parks and recreation department’s popular summer camp as pandemic victims. Both have been canceled.

And, the annual free weekly concerts in Veterans Park, which attracts many, have been put on hold until August at the earliest.

The parade not only draws current residents, but also many former residents every year.

“It’s something that brings the community together,” Getty said of Lyons’ Fourth of July celebration. “People come back to town for that event. It’s just a nice time.”

Getty is hoping the Fourth of July parade, party in the park and fireworks “will be better than ever next year.”

But the village’s hand this year was forced by the pandemic, he said, noting that by not having large crowds gather would limit potential transmission of the virus.

The parade route is along Joliet Avenue, which is being rebuilt this year. That project is going smoothly, Getty said.

Getty said the project would not have forced moving the traditional parade route.

“Our plan was to have been done by July 4,” he said. “Now that it’s not happening, they’re not scrambling.”

In other news, a letter to business owners dated June 22, the village reminds them that Illinois will enter Phase 4 of the state’s pandemic response on June 26.

The village is allowing all dining and liquor establishments to maintain temporary outdoor operations.

Interior operations are to maintain the recommended seating distances of six feet while having just 25 percent of capacity inside, per the letter.

Outdoor operations are permitted from 8 a.m. to 10 p.m. daily, the letter said.