The jamming guitars and pounding drums have been silenced at Stonegrove Guitar, 821 W. Hillgrove Ave., in La Grange.

The place where for the past 18 years kids and adults learned how to play guitar and drum closed its doors on Halloween, another victim of the coronavirus pandemic.

Owner Max Dombrowski said our “hostile economy” meant “the nature of the lesson business has changed.”

“Guitar teachers play gigs to supplement their income, and that’s dried up in the pandemic,” he said. “The number of teachers went from eight or nine pre-pandemic to three or four.”

“For the most party, they were pretty scrappy and did their thing,” he said. “But it’s become a time where people have to change their lives to make a buck.”

Stonegrove Guitar did offer cyber lessons during the pandemic, and they went okay for a while.

“We lost about half our student base during that time,” he said. “And it’s not appealing to start lessons with a stranger, instead of your old teacher on the screen instead. … It dropped off gradually and there just wasn’t anything to pick up the slack.”

Instructors gave in-person lessons in five small rooms in the back of the shop after pandemic restrictions were lifted.

“At the start, it was okay,” he said. “A lot of (students) changed their minds or found other sources of instruction.” 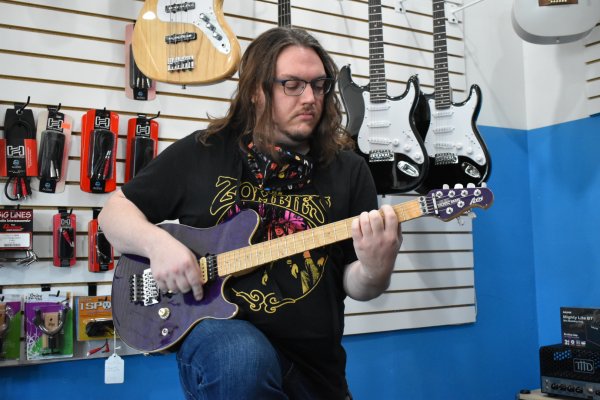 Max Dombrowski, owner of Stonegrove Guitar in La Grange, plays a tune the day before the longtime shop, where many learned to play guitar and drums, was shut down. It’s a victim of the economy hurt by the pandemic. Photo by Steve Metsch.

“At the start, it was okay,” he said. “A lot of (students) changed their minds or found other sources of instruction.”

Dombrowski, 32, has been affiliated with Stonegrove since he was a teen, riding his bicycle from Brookfield home and staying for three or four hours.

“Stonegrove was always a welcoming place,” he said. “You could learn

Something about the guitar if you sat in the shop for an hour or two.”

He eventually got a job teaching and was 26 when he bought the business in 2014 from Paul Cicciarelli. The shop was located one block to the east, and moved to the current site in late 2018. 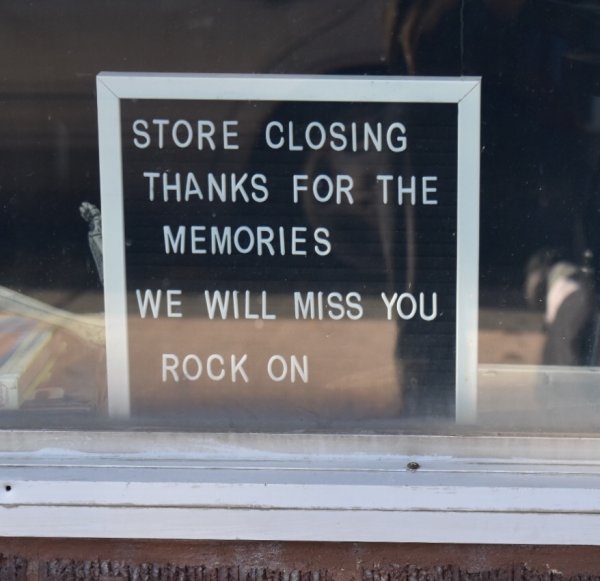 Closing Stonegrove means guitarists like Bob Martin, 66, have lost a place to hang out and talk music. Martin discovered Stonegrove on a bike ride in 2017 after he moved here from Rochester, N.Y.

“Max and I have been fast friends ever since,” Martin said. “That’s what it’s like here. None of the guitar stores have that familiar, Floyd’s Barber Shop feel, where you walk I and feel at home.”

Don Medrala, former owner of the defunct Beautiful Day Records in downtown La Grange – where Dombrowski was the last employee – – said he is “sad for the people coming in for lessons.”

“(Max) is a very personable guy, great at guitar repair,” Medrala said. “You have spots that make a town. This is one of them, especially for the younger generation.”

Although the store is closed, Dombrowski will continue to repair guitars out of his home in Westmont. And, the store’s website will stay active at www.stonegroveguitar.com.

Dombrowski is the guy local rock star Jim Peterik calls when he needs his guitars serviced, although the pandemic has cooled demand.

“But every time he has a show, he slams me with five to eight guitars that need to be serviced and dialed in,” Dombrowski said. “They are the tools of his trade. … He’s a discerning customer and it’s been great working with him and I’m still going to be working with him.”

Peterik is “bummed” by the news, and he’s not alone.

“Everyone’s bummed. It’s the end of an era,” Dombrowski said.

Asked if he may one day reopen Stonegrove Guitar, Dombrowski said:

“Maybe there’s a chance in the future if the economy has confidence and we don’t have to social distance as badly.”