In response to the coronavirus, the Summit Village Board has decided to delay its first meeting in April.

Normally, the board meets on the first and third Monday each month.

With a nod to CDC recommendations that no groups should be larger than 10, the village board has decided it will not meet on the first Monday in April.

Instead, the next meeting of the village board will be at 7 p.m. April 20, Trustee Sam Dardovski said early this morning.

“By then, we anticipate all this stuff will be blown over,” he said. 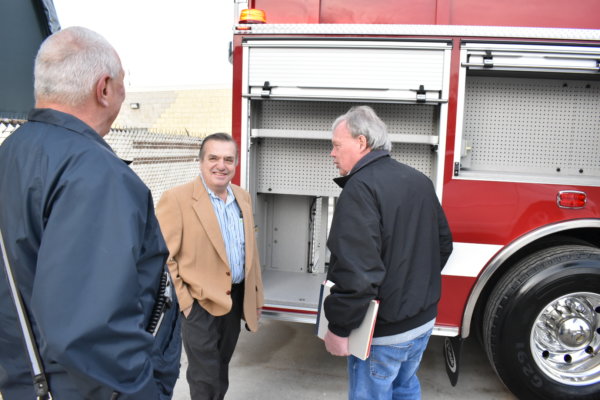 Summit Village Trustee Sam Dardovski (tan coat) said the village board’s next meeting is pushed back until April 20 because of concerns about the coronavirus. Photo by Steve Metsch.

No residents attended the board meeting on March 16 when three business licenses were on the agenda.

“Yes, yes, all three of them got approved. The restaurant there was an existing restaurant. A new guy took over the license,” Dardovski said.

He was referring to a business license for Mi Vallarta, a newly named restaurant at 6237 S. Archer Road.

Video poker and other gaming there, however, will have to wait as the state has turned off video gaming machines across Illinois in an attempt to slow spreading the coronavirus.

The other business license approved is for Anytime Labor, a temporary staffing company at 6248-50 S. Archer Road.

In other business, the public works department will get a new stump grinder for $9,807 from Atlas Bobcat.

A business owner himself, Dardovski is taking advantage of the state-ordered closure of restaurants and taverns in an attempt to slow spreading the virus.

The restaurant was closed, as were others statewide, by the governor the night of March 16 in response to virus concerns. But it has been a very busy place, even without customers.

“I’m totally remodeling the whole restaurant. Floors. Walls. Everything. We knocked the bar out. Massive remodeling. What else am I going to do now?” Dardovski said.

“I’m 10 days into this project already,” he added. “Wait till you see it. You’re going to fall in love with this.”