The Bridgeview Village Board had a new look at its most recent meeting.

There are no new trustees. Nor was the meeting room redecorated. Rather, the six trustees, mayor, clerk and attorney were spread out.

It was in keeping with the CDC guideline that we maintain social distancing of at least six feet in order to combat spreading the coronavirus.

So, at the meeting on March 18, trustees James Cecott, Norma Pinion and Mary Sutton were sitting at a folding table in front of the where board members usually sit.

They were all about six feet apart. 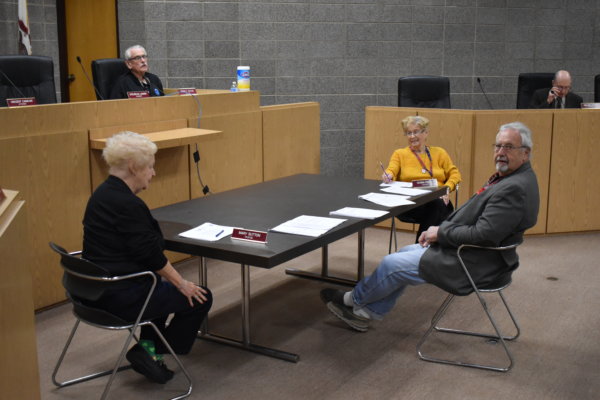 Elected officials at the March 18 meeting of the Bridgeview Village Board sat far apart to help curb the spread of the coronavirus. Trustees Mary Sutton, left, James Cecott and Norma Pinion sat at the folding table while clerk John Altar, upper left, and trustee Michael Pticek sat in their usual seats. Photo by Steve Metsch.

Landek joked that the board members had argued and “just didn’t want to be next to each other.” Turning serious, he said the village is following CDC recommendations.

Even the handful of audience members were spread out at safe distance for a meeting that lasted about eight minutes.

During the meeting, the board unanimously approved a special use permit and rezoning of property located near the northeast corner of 79thStreet and Harlem Avenue from commercial to general industrial.

That’s so FedEx – which recently acquired the site – can park and stores trucks there. The rezoning and special use permit apply specifically to 7725 and 7661-69 S. Harlem Ave.

Part of the agreement includes FedEx installing screening and landscaping that will offer a “layered effect” of sound barriers, and a berm with vegetation.

“It’s going to be a nice thing. They’re going to have a south wall with trees and bushes,” said Struzik, who oversees building, zoning and economic development.

FedEx will not be permitted to repair trucks or trailers on the site, and all ingress and egress shall be from South Sayre Avenue with no access from Harlem Avenue.

Asked when renovations will be being, Peter Verros, an attorney representing FedEx, said, “TBD. We don’t have a date.”

The board approved a special use permit for a truck repair shop operated by Coyne Transport LLC, 9024 S. Oketo Ave.

And the board approved using grant money to purchase ballistic helmets and body armor from Red Arrow Sales in the amount of $40,775. They are for the fire department.