The Lyons Village Hall will be closed Monday in respect to village Trustee Greg Ramirez, who died earlier this week, Mayor Christopher Getty said in a news release Thursday.

“Greg dedicated his life to public service, not only as a village trustee but as a Chicago police officer for 23 years,” Getty said.

“He was a loving father and grandfather, a dedicated member of our community, and a great friend to many of us in Lyons,” Getty added.

Ramirez, 68, died Tuesday after a long fight with cancer. But he still showed up for village board meetings until a few months ago, using a walker and later a wheelchair. 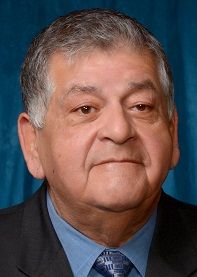 “Greg was a very good representative of the village. I enjoyed working with him. He and I went to a lot of events together because of his affliction. He was a good guy to work with,” Trustee Dan Hilker said Thursday.

It was Ramirez, Hilker said, who recommended that the village officials talk with James Keating, also formerly of the Chicago police, about becoming police chief in Lyons.

“Did you ever see the movie ‘Cool Hand Luke,’ when George Kennedy’s character talked about how Luke passed? He said he probably had ‘that old Luke smile.’ That’s how I’m going to remember Greg, with that ‘old Greg smile,’ ” Hilker said Thursday.

“He was very sincere when it was business time, but socially, he always had that old Greg smile,” Hilker added.

Entombment will be at Resurrection Cemetery. In lieu of flowers, donation to www.NODCC.org are appreciated.

For more information, call 312-842-8681. You can visit www.dalcamofuneralhome.com to sign a guestbook.