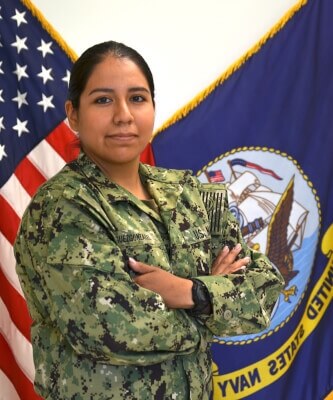 Navy Office of Community Outreach
Sailors are some of the most highly-trained people on the planet, according to Navy officials, and this training requires highly-dedicated instructors.
At Naval Education and Training command, instructors at advanced technical schools teach sailors to be highly skilled, operational, and combat ready warfighters, while providing the tools and opportunities for continuous learning and development.

Seaman Recruit Mariana Rodriguez Gonzalez, a native of West Chicago, Illinois, is a student at NETC, learning the necessary skills needed to be a culinary specialist.

A culinary specialist prepares high-quality nutritious meals to improve sailors’ morale so they can perform their duties on a daily basis.

Students attend advanced technical schools after “boot camp.” They are taught the basic technical knowledge and skills required to be successful in their new careers.

Gonzalez, a 2013 graduate of West Community High School, credits success in the Navy to many of the lessons learned growing up in West Chicago.

“I learned that getting out of my comfort zone from my hometown was needed to achieve better and greater things in life,” Gonzalez said.

NETC educates and trains those who serve, providing the tools and opportunities which enable life-long learning, professional and personal growth and development, ensuring fleet readiness and mission accomplishment.

NETC is made up of six commands that provide a continuum of professional education and training in support of Surface Navy requirements that prepare enlisted sailors and officers to serve at sea, providing apprentice and specialized skills training to 7,500 sailors a year.

Serving in the Navy is a continuing tradition of military service for Gonzalez, who has military ties with family members who have previously served. Gonzalez is honored to carry on the family tradition.

“I have a cousin in the Mexican Army who serves as an infantryman,” Gonzalez said. “It makes me proud to serve in the military as he is doing.”

As a member of one of the U.S. Navy’s most relied-upon assets, Gonzalez and other sailors know they are part of a legacy that will last beyond their lifetimes providing the Navy the nation needs.

“Serving in the Navy means having the opportunity to be a part of something bigger than myself,” Gonzalez said. “I was able to finish school and set an example for my siblings. As the youngest, I have a sense of pride being the first to serve in the U.S. military and provide for my mother financially.”

Website Editor
Please send us your press releases, event notices, photographs and Op-Eds for consideration to be included on our Suburban Chicagoland Community Newspaper website.